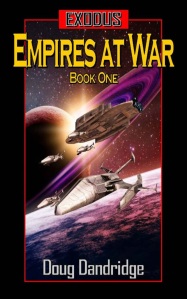 The Exodus series has to date sold over 58,000 copies, and has over 550 worldwide reviews on Amazon, with a 4.4 star average rating.  Books three through five have made it to number one in Military Science Fiction and Space Opera on Amazon UK, and has hit the top ten in those categories in the US, book 3 actually hitting number two in both categories.  Book 6 is coming out on April 27th, and in celebration I am giving away book 1 from April 25th through 29th.

Humankind was forced to flee when the mighty Ca’cadasan Empire, which had been in the business of conquest for thousands of years, came calling on one of humanity’s new interstellar colonies.  The humans killed a Ca’cadasan warrior after surrender, the heir of the Emperor, and sealed the fate of humanity.  The six Exodus ships were launched in an attempt to get some of the human species to safety.   Each contained fifty thousand colonists in cryostasis, along with a sampling of human creativity and the genetic heritage of several worlds, as well as the sum total knowledge of the species.   One ship was known to escape, while four were destroyed.  No one knew what happened to number five, with the possible exception of it crew.  Exodus III, the known survivor, voyages a thousand years and ten thousand light years, to find a new home in the Perseus arm.  A new colony is started in the Supersystem, a cluster of eight stars in orbit around a black hole.  Over the next thousand years the human species wars with the many alien species of the region, growing in power and technology as they expand to become the preeminent power in the region.  The pride of the Empire is the Fleet, an organization that has never lost a war.

On the thousand year anniversary of the New Terran Empire, most are thinking of the yearlong celebration that would take place among the ten thousand occupied planets of the polity.  The Emperor has other things on his mind, as his prophetic dreams are telling him that the old enemy is coming.  Soon, unknown ships of a vaguely familiar design are seen scouting Imperial Space.  The Emperor is on a crusade to expand the military, but meets stiff resistance from Parliament, and alien powers that see the buildup as a sign of future human agression.  And the century long engineering project, the Donut, an enormous circular station in orbit around the black hole, is coming online, producing the first wormholes that will eventually link the Empire.

Sean Ogden Lee Romanov, the third son of the Emperor, is a serving naval officer on a battleship, with no aspirations to sit on the throne.  Extremely intelligent, the young man is at best a mediocre officer, but is determined to make the Fleet his career.  But a tidal wave is coming over the horizon that will change everything.  Dreams will be shattered, lives lost, and billions displaced as the consummate Empire builders come calling.  And soon war will erupt like the Perseus arm has never before seen, as mighty amateur fights the consummate professionals of the Fleet, in a battle of extermination that neither can afford to lose.

So if you haven’t read this series, get in at the bottom with book 1 at http://www.amazon.com/Exodus-Empires-Book-Doug-Dandridge-ebook/dp/B009TZSBJO