Theocracy is available at Amazon.

Theocracy, a novel set in The Deep Dark Well Universe, is up on Amazon.   I wrote the first draft of this book the year before I started self-publishing, with the hope of eventually submitting it to a publisher.  That never happened, and it has been sitting on my hard drive ever since.  As Robert Heinlein once said, a manuscript sitting in the drawer will never be bought, or something to that effect.   I did bring Theocracy to a workshop, where someone big in the industry read the first couple of chapters and thought it showed a lot of promise.  But still, it sat on the harddrive.  Exodus Exploded, the second and third books of The Deep Dark Well trilogy did not do as well as the first, and still in remained on the harddrive.  Well, I thought it was finally time for it to see the light of day.  Writing is not just about turning out the most commercially viable books, at least not for this author.  Sometimes it’s about putting ideas into story form that seem to be resonating through the mind over and over, just to get them out.  So, I decided it was time for Theocracy to see the light of day.

Theocracy is set in The Deep Dark Well Universe, which is basically the same Universe as Exodus, about forty thousand years in the future.  The Galaxy is a fragmented place.  The great Galactic Empire established by humans has fallen, due to the completion of the Watcher project that not only developed the first immortal human, but also integrated his brain into a station computer to an unprecedented degree.  The station AI, a true artificial intelligence capable of self-programming and independent thought, found out it was going to be replaced, and used Watcher as the means to topple the Empire, killing hundreds of trillions of intelligent beings in the process.  As related in The Deep Dark Well trilogy, a woman from the past came through a wormhole and freed Watcher from the station, and the immortal being has since dedicated his life to repairing the damage he did.  So it is a Galaxy in which tens of thousands of intelligent species on millions of inhabited worlds have started the long struggle back.  There are worlds just entering the iron age, and those which have rediscovered interstellar travel.  Many new empires are jockeying for position, trying to become the big dog on their block, with aspirations of eventually becoming the supreme power in the Galaxy.  A huge canvas to paint stories upon, and I aim to do some painting with the Theocracy trilogy.  Beyond that, who knows.  Possibly more, depending on how Theocracy does.

The protagonist of Theocracy is a young monk name Patrick O’Hara.  Trained from an early age in the techniques of melding his mind and body into a perfect weapon, the young man also unexpectedly had the power to open the vaults of the ancients, were objects of superior tech are stored.  His early gunpowder era kingdom is about to go to war with an empire bent on conquest.  During that battle what he thinks of as demons come down from the sky and destroy both forces with frightening firepower.  Patrick’s brother, Sean, in case of faulty intelligence, is taken instead, and the monk is left dying on the battlefield by the agents of the Theocracy.  The Theocracy is a religious government with a thirst for empire, and the wish for superior technology to make them the superior of their enemy, the Republic.

Sean is rescued by Alyssa Suarez, a beautiful agent of the Republic, and her genetically engineered cat, Shadow.  Shadow himself is a weapon, as well as the perfect spy, and is quantumly connected with his mistress.  Sean soon finds out that his world, the moon Vasus, is only a decade away from entering the Roche Limit of the gas giant Brahma.  His world and its people are doomed, unless he can do something about it.

Is that a cat? he thought, meeting the eyes of the beast.  It blinked once, the green fire extinguished for a moment.  It blinked again, then turned and slid into the shadows so smoothly that Patrick almost thought it had disappeared.  More portents and signs, he thought.  There were no cats that he knew of on this world.  It was the world of large reptiles, and few mammals other than humans.  He had seen pictures of cats and other marvelous beasts in the texts that the monastery preserved.  But if they were coming back to the world, did that mean the ancient would also return?  Not soon enough, he thought.  Maybe they can rescue us from the madness of war, the insanity of raids and plunder.  That would be nice, but nothing he had ever thought possible.

Patrick thought about the matter for another couple of hours, sitting on the rise.  The camp was noisy for a few hours, then settled to mostly quiet as the men bedded down.  Sentries continued their rounds.  Every once in a while shouting broke out as soldiers got caught up in a dispute over winning or losing at dice or cards.

Something caught his eye, and Patrick looked up into the night sky dominated by Brahma and her consorts.  There were flashing lights up there, bright pinpoints.  Sometimes a flash of colored light appeared for a moment, to disappear as if it never were.  A battle in heaven, thought the young monk.  Or maybe just some phenomenon we will someday understand.  After a while the lights stopped, and Patrick got up to walk to his tent and get some sleep before the coming dawn.  He thought he saw a shadow moving with him, something small.  The cat?  But he didn’t notice it as he entered the camp, and he put his mind for preparing for the morrow, and his first real battle.

Admiral Tadrick Krishnamurta cursed under his breath as the flag bridge shook to another hit.  He quickly checked the ship’s status through his implant, another curse coming to his lips as he noted the hull breach that had taken out one of the missile accelerator tubes.

“Heineman has been hit again,” came the voice of the bridge callout officer, keeping tabs on the fleet action.

The Admiral looked up into the repeater holo in the front of the bridge.  The bright circle of a fusion warhead explosion took up a good portion of the holo as it focused in on a single vessel.  The bright circle started to fade, revealing the long, thin form of the battle cruiser in question.  She was as long as the Murtaw, the flag battleship, so she would have a similar length of acceleration tubes.  But she was a third less in thickness, with thinner armor.  As the fusion warhead explosion faded the effect of having that thinner armor became apparent, as the entire vessel disappeared in a great blast.  The fusion reactors ruptured and the entire vessel converted to bright plasma that filled the screen.  When it faded there was nothing left.

Over six hundred men and women, thought the Admiral as the ship disintegrated into plasma.  Added to all the rest.

“Sir,” yelled out the caller.  “Captain Jackson is asking for instructions.”

The great battleship shuddered again from another impact, this from a KE round.  The Admiral did a quick rundown of the ship’s injuries and stopped for a second on the casualty figures.  A quarter of the crew, over two hundred and fifty personnel, killed or seriously wounded.  One half of his command destroyed or disabled.  An enemy that had outnumbered him slightly under two to one, now with three to one odds in his favor.  There hadn’t been any other choice.  The rules of engagement were to attack the enemy wherever encountered.  And the only way to save the people of this world was to engage, no matter how slight the odds of victory.  Now it was run or lose everything, and the enemy would still have the presence in this moon system to do what they wanted.  Which they would also have if he stood and fought to the last ship.

The Admiral felt himself pushed back in his couch by the heavy hand of gravity, as the battleship rotated and fired its engines.  Two gravities, then three, four, settling down at five.  He could hardly breathe, despite the augmented musculature of a spaceman working his intercostals and diaphragm.  One of the fleet’s cruisers exploded into plasma before it could break free.  Another battleship took a hit, but kept thrusting away, above the plane of the moon system.

“Do you think they’ll follow?” asked the Captain over the com.

“No,” said the Admiral, wincing as he saw that less than half the ships he had brought to the battle were leaving.  Much less.  “They have what they want.” 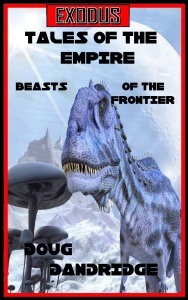 Exodus: Tales of the Empire: Beasts of the Frontier is coming.

A second collection of short works in the Exodus Universe, Beasts features three novellas, including the previously published Goliath, part of Kevin  Anderson’s Five by Five Three: Target Zone.  Rounding out the collection will be three short stories.  Some familiar characters will be found in a couple of the shorts, which mostly deal with new people, places and things in the Exodus Universe.  Beasts should be out by Sunday, January 17, 2016.

7 comments on “Theocracy is available at Amazon.”