My Trip Out West, the Last Chapter. 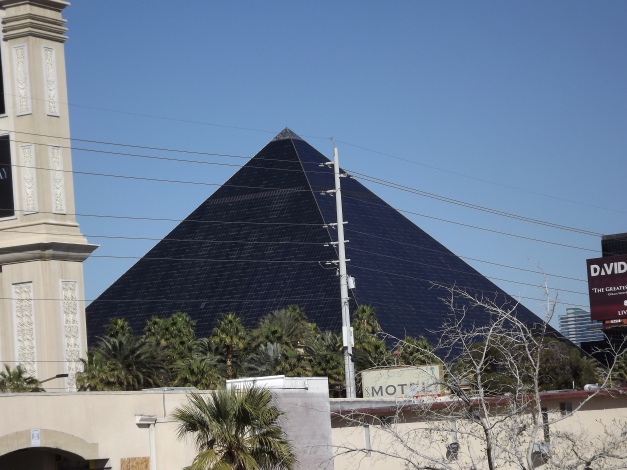 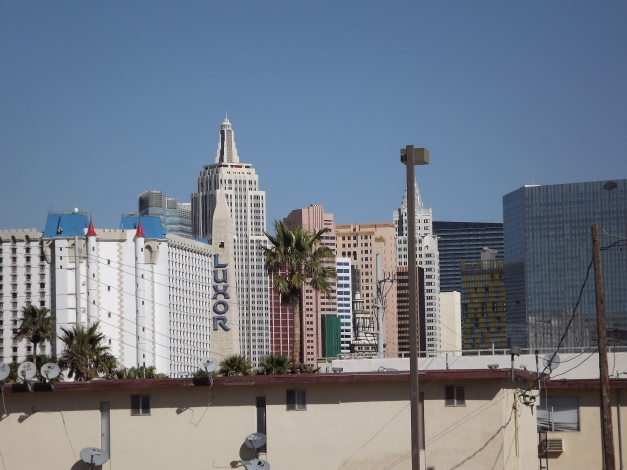 I woke up on Sunday morning and packed, then went down for breakfast in the little restaurant at the Hilton.  Got into a conversation with the waitress who had a friend who wanted to become a writer, and was supposed to be there for breakfast.  I waited a little while, but he didn’t show, so I started on my day.  First, I wanted to get a look at the strip in the daylight.  I was thinking it would be dead on a Sunday morning, but I should have known that Gomora never sleeps.  Still got some very good pictures of the tackiest place on Earth.  Luxor, New York New York, Paris, Planet Hollywood, Caesar’s Palace. Circus Circus.  All the famous names, including Trump and the tallest building in town, the Stratosphere Tower.  There were people everywhere, and I guess gamblers got to gamble as long as they have any money.  I was able to stop at a couple of places to get pictures, but I took most of them from my car.  There were some angry horns behind me when I took my time at a light to get a good shot.  I didn’t really care.  I was in a rental car, they didn’t know who I was, and I was gone before anyone could get out of their cars.  Got some great pictures.  Next time I will go into some of the casinos, possibly see some shows, but I’m not one to throw away money on games of chance that favor the house. 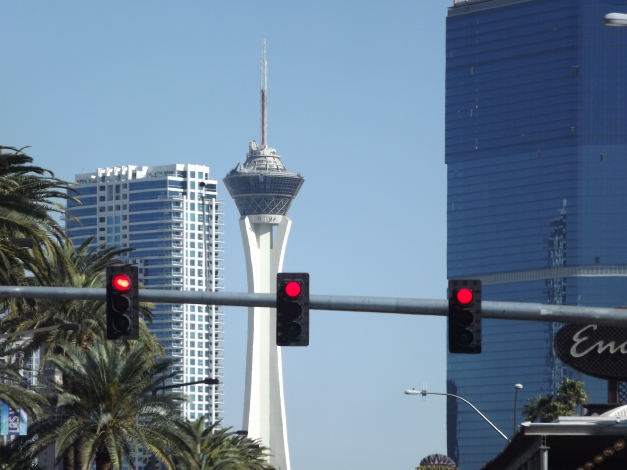 I had decided to go to the Valley of Fire State Park after driving through the center of Sin City.  I didn’t know anything about the place, except the name sounded cool.  I thought it might be the site of ancient volcanoes, and that was something I would have really liked to see, since I had missed the ones back in Arizona.  It was about a half hour’s drive to the offramp, and I stopped at the Piute Indian truck stop when I got there to get some gas and get a snack.  I played my only slot machine while there, spending all of seventy cents for two plays.  Now I was expecting the one armed bandits when I got to Vegas, the ones like in the Twilight Zone episode, or every movie I have ever seen about the area.  The ones where you put a coin in and pull the arm down.  If you’re lucky a bunch of coins comes rattling into the hopper at the bottom of the machine.  Nope.  Now they’re digital instead of mechanical.  You put in bills or credit/debit cards, get a readout, and push a button.  Not at all as exciting as actually putting a coin in and pulling the arm.  And you get a ticket printout of your winnings.  How boring.  And for some reason I would trust the mechanical version more than the on the fly electronic one.  Anyway, I had fed my very tiny gambling addiction (really nonexistent) and it was time to see the sights. 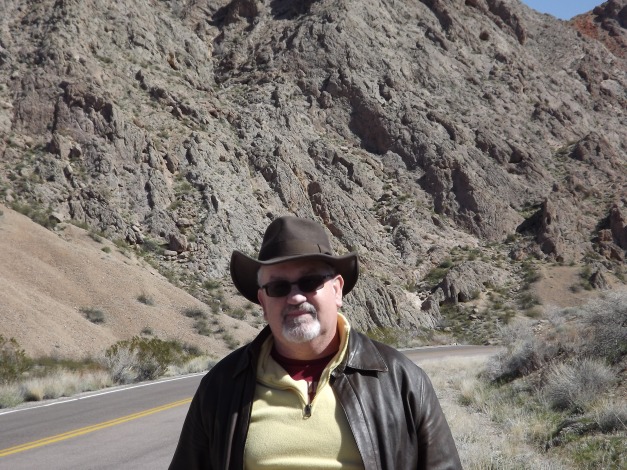 Just before the Valley of Fire. 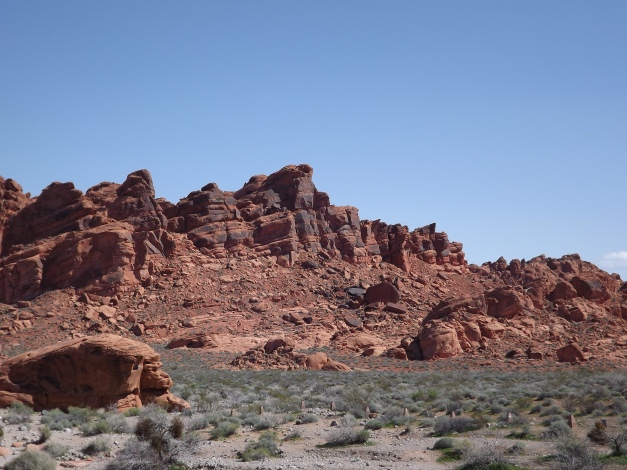 The Valley of Fire.

It was a fifteen mile drive to the park, and after about eight miles of almost flat desert the mountains along the way were spectacular.  I don’t think I saw any boring rock formations on this trip, and again, every one was as individual as a fingerprint.  And then the Valley of Fire was in front of me, large groups of red rocks sticking out of the earth.  Again, spectacular rock formations, almost every one of them red.  A good percentage of these rocks were iron ore, and had rusted over the ages, then were thrust up through plate tectonics.  At the entrance of the park were some spectacular formations, and I spent some time walking around to get a view of the petrified logs.  Further in were even more spectacular formations.  In one direction was a valley that reminded me of someplace in the alps, rolling valley going up to highlands.  At the guest center, near the center of the park, was a road that went up into the mountains, with some white rocks intermingled with the red.  There were signs pointing to the Beehives, and I had seen a sign about African Killer Bees in the park, so wasn’t sure I wanted to go there.  Turns out they were rock formations that reminded one of beehives. 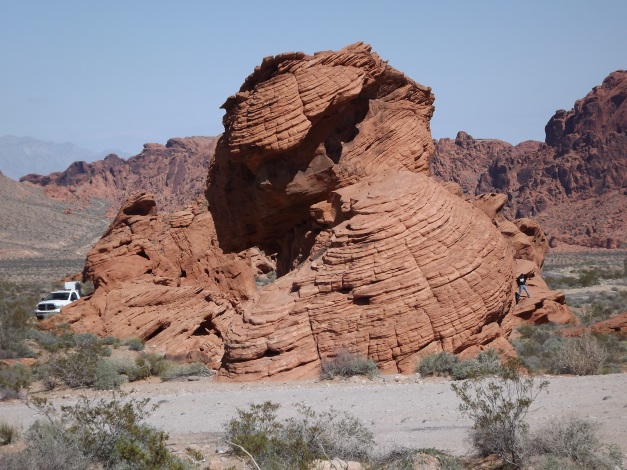 I drove back to Las Vegas, wondering what I was going to see next to kill some time.  There was Red Rock Canyon, which I had seen on my GPS the other day.   I punched it into the GPS and I was off.  On the way back I noticed lots of places in the desert glittering in the sun.  It was pieces of glass from shattered beer bottles, and I realized that people in this place partied in the desert and trashed their party spots just like many people back east.  Sad.  I got back into Las Vegas and found that the direct path to the canyon was closed down, the highway under construction, which forced me back into the center of the city, back to the strip.  I got to the park at 4 PM, wondering if it would be closing soon. 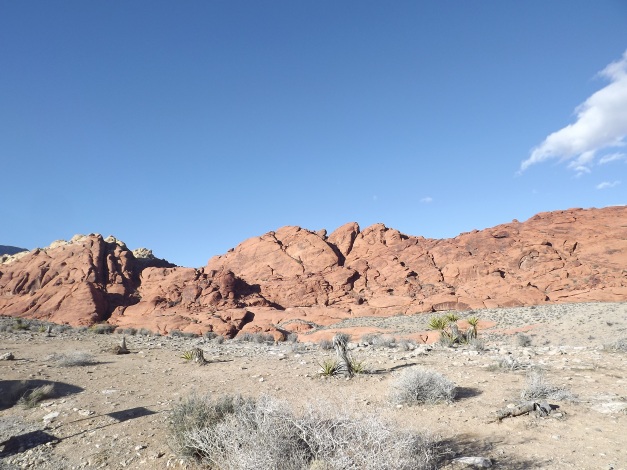 One of the few formations of red rocks in Red Rock Canyon.

There were a bunch of cars waiting at the payment booths.  I paid and started into the canyon, intending to stop at the visitor center and use the bathroom.  I missed the turn and was on a one way road into the canyon, my bladder about to burst.  Another thing about the desert.  There are no convenient trees to go behind, and in this place all of the rocks were mountains, and people could see you from miles away.  So I held on until I reached one of the bathrooms, which were really just permanent versions of portolets.   The canyon, which was really more of a valley, looked about a mile wide from the entrance.  It was hilly, with the road winding up and down the rolling landscape, large rocky mountains around the sides.  I swore I had seen some of those formations before, in texts or pictures.  It took about an hour to drive around the valley that had appeared only a mile across.  I looked it up on Google Maps later, and found that it was large enough to drop Tallahassee in. 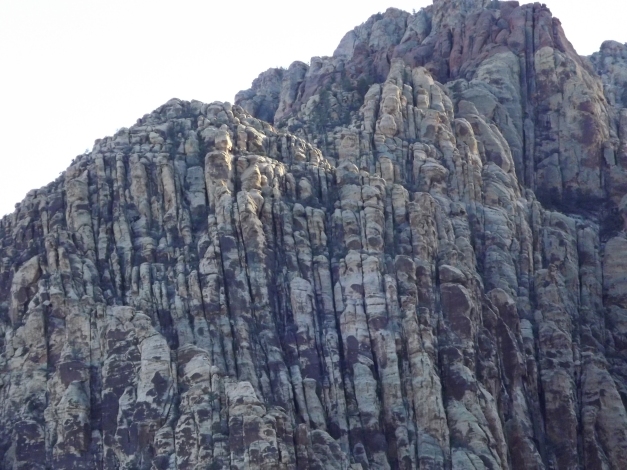 Afterwards, I had time to kill.  I washed the car so it would be clean when I turned it in, then went to get something to eat in a place where I could sit for a couple of hours.  Then to the airport to catch my flight, three and a half hours early.  When I turned in the car I asked if they wanted my half case of bottled water.  They said yes, and I pulled the water from the trunk, then noticed all the bottled water sitting there on the side of the return lane.  I guess a lot of people have read the caution about carrying water in the desert, and most don’t finish all that they bought.  I rode the bus from the car return to the airport, and most everyone was talking about all the money they lost at the casinos.  I felt good about only wasting seventy cents.  Through TSA, always fun, then a three hour wait for the flight to leave.  There were slot machines behind the waiting area, and I thought they must be trying to make sure people didn’t get away with any money in their pockets.

The flight was crowded, capacity, and uneventful.  We came into Atlanta at sunup, and it was another more than two hour wait for the flight to Tally.  I met the FSU Softball team and their coaches while waiting.  While I was flying in from Nevada on the redeye, they were taking the overnight from California where they had played in a tournament.

So, what did I learn?  That you really have to see things with your own eyes to get perspective.  That the clear air of the desert and altitude made everything look much closer than it was, and there were few places to hide there.  That you could get dehydrated at thirty degrees.  I could just imagine what it is like in the heat.  And I found the setting I would use in my future post-apocalyptic series.  It was a great trip, an eye opener, and a treat for the soul.  I have vowed to return, this time going into North Nevada, over into Utah, and down to see the Grand Canyon from the north face.  Not sure if I would want to live there (though the thought has crossed my mind), but I could become a frequent visitor.

Remember, Exodus: Empires at War: Book 12: Time Strike is available on Amazon.US and Amazon.UK.  If you hate time travel stories, you might like this different take on them.  And Exodus: Machine War: Book 3: Death From Above is now on Kindle Unlimited.

4 comments on “My Trip Out West, the Last Chapter.”