Trip Out West the Second: Day 9 and Final Thoughts

Ate a good breakfast at the Hilton, then packed up, getting everything I was going to take back into two bags and the CPAP bag.  I left the small ice chest and fan behind, and got everything else into the car.  Then it was to another Terrible’s, this time Terrible’s Car Wash, to get the car cleaned before I returned it.  Actually, it was a very good car wash.  The $11 wash included a guy running a brush over the front of the car, then going through the automated system that was much more involved than those I use in Tallahassee.  Then it was on to turn in the car and get to the airport.  The airport in Vegas is laid out in an unusual manner as far as I’m concerned.  The rental car areas are ten minutes by shuttle bus from the terminal.  They took the car back without comment.  I had put just under 2,500 miles on it, probably more than most people, but they didn’t bat an eye looking at the odometer.

I checked in at the Delta counter outside, something they were also doing at the Tallahassee airport.  I left my cane sitting on the counter and didn’t remember it until I was well into the terminal, almost to the Transportation Security Administration checkpoint.  It was a cheap travel cane, I had much better at home, and I wouldn’t be flying again for at least half a year, so it was sacrificed on the altar of expediency.  The first two people at the TSA checkpoint were as rude and obnoxious as advertised, though the ones I dealt with further in were nice enough.  The second agent told me to sit my ass on the damn stool if I couldn’t take my shoes off standing.  After unpacking everything in my carry-on bag that I had so laboriously packed in, with impatient people bunching up behind me, I got through the checkpoint and spent the next ten minutes getting everything back in.  Thank you TSA.  I feel so much more secure, not.

The plane took off from Vegas on time and got to Atlanta early.  But the flight to Tally was delayed, then the departure gate switched.  Sat down next to a guy in the waiting area who was reading the Silmarillion and we got into a conversation about scifi and fantasy.  And then it was onto the plane, to Tally, and home. 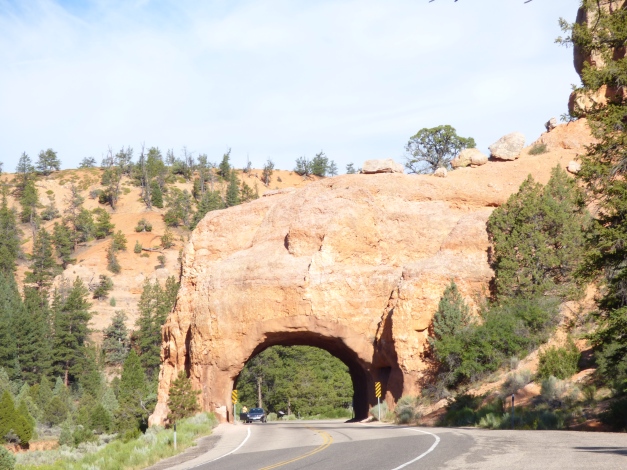 Rod on the way to Bryce Canyon.

I was afraid my cats were going to be pissed at me for leaving them for a week.  Like, where in the hell have you been?  You weren’t here taking care of us.  Instead, they were really glad to see me, and spent the rest of the evening all over me.  It was good to be home, though I will want to return to the Southwest sometime in the future.  Possibly even move there.  But that’s for another time.

Get the National Park Pass if you’re going to a bunch of them.  It gets you into every National Park, Monument and Historical Site that charges.  There are a lot of them out here, and it saved me over a hundred dollars getting it.  The people at the gates seem to be glad to see them as well.  A quick scan, maybe a look at your ID, and you’re in. 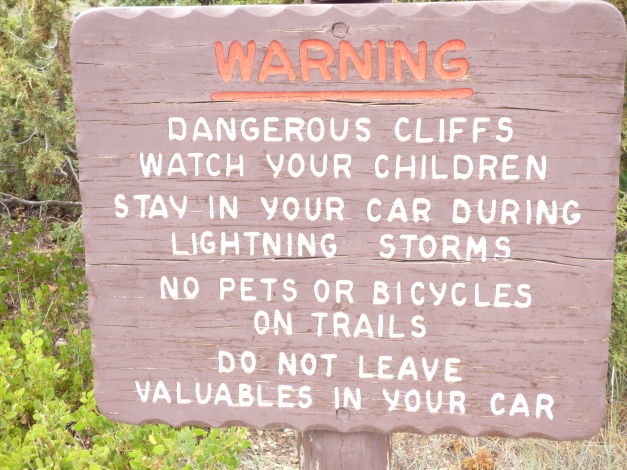 Make sure you have a full tank when going anyplace, and make sure your bladder is empty.  No kidding, you might be driving for hours before you see anything but beautiful vistas.  And there isn’t always a place to pull over to take a piss.  I never let my tank get below a quarter full.  Though it isn’t quite the wilderness that the German couple thought, there are roads and electricity after all, there are vast stretches of emptiness.  No cell coverage, no police (I saw maybe four police cars my whole trip), no stores.  I’m sure someone would have been along within a couple of hours on any of the roads I was on.  The important thing to remember is to be responsible for yourself, because there is no safety net, as least in the short term.

Sign at the motel I stayed at in Moab.

Book rooms ahead of time.  That means having a computer and staying at places that have wifi and figuring out where you want to stop the next day.  There are a lot of people looking for rooms at the end of the day, and you are competing with them if you don’t have something already set in stone. 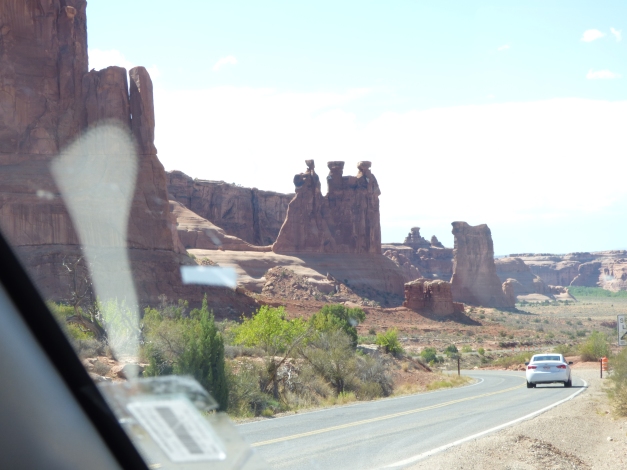 Drive the speed limit or below.  There are a lot of places where the posted limit was well thought out.  When I was driving switchbacks up and down mountain roads, some with no guard rails, I was well below the speed limit.  If people were backed up behind me, too bad.  Their convenience was not more important than keeping myself from falling to my death.  Suck it up, snowflakes. 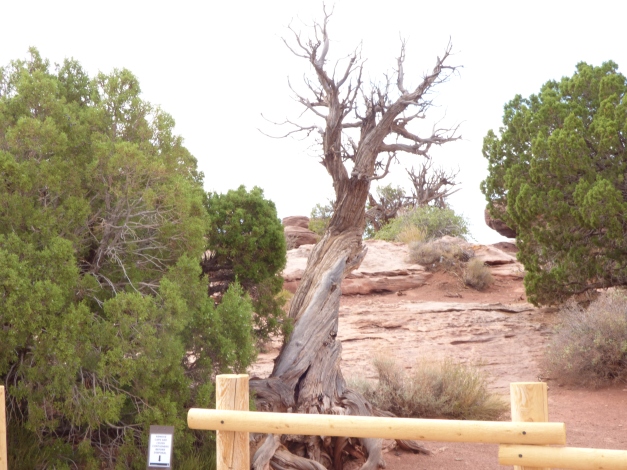 The desert is tough on plants as well.

For someone from the hot and humid South it was not all that uncomfortable for the most part.  With the exception of Death Valley and Needles, I really didn’t feel all that hot, even when outside of the restaurant in Goodsprings when it was 111 degrees.  You don’t feel any sweat, because it’s wicking  into the dry air as soon as it flows from your pores.  Same with the moisture from your lungs.  So you feel great even while you’re dehydrating, the great lie of the desert.  And if you aren’t drinking water, you will get dehydrated.  So drink water, even when you don’t feel like it.  Which means having water in your car.  I bought a case when I first arrived, and only had two left when I departed.  You can’t depend on always being near a water source, and if you break down out here, you could shortly be in serious trouble.

Balancing rock on the way to Canyonlands.

A lot of people I know won’t like this one, but here it is.  There are a lot of public lands out here, preserving a lot of spectacular natural beauty.  I wish there was more, and more of the lands were protected for the future.  Once they’re turned over for exploitation they’re gone.  And I don’t believe that crap about mining and oil companies returning the land to the way it was.  I’ve seen the strip mines in Alabama when I lived there.  What had been natural hilly forest was now one big rectangular hill.  Sure, there were trees growing on it, but it wasn’t as good as new.  I’ve seen the wild rivers I used to canoe in Florida now that there are developments all up and down the banks, and they aren’t the same.  Disagree with me, fine.  Don’t try to argue with me about it because I don’t want to hear it. 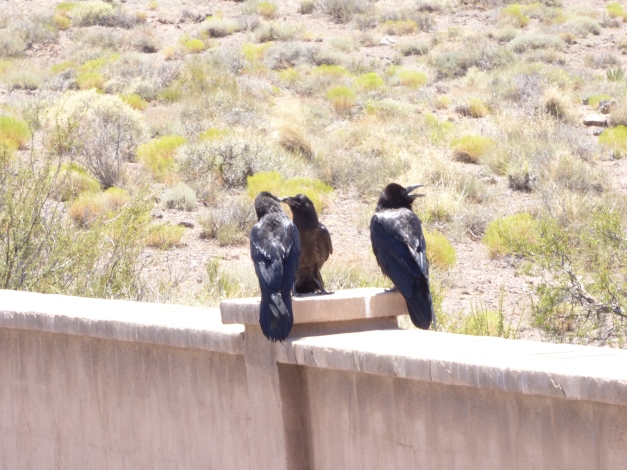 These guys seemed to do well in all the areas I visited.

Put time into planning your trip.  I used Google Maps and the internet to check out a lot of places, and still got caught by surprise.  I drove right past the sign that pointed to Goblin Valley State Park.  I knew it was somewhere in Utah, but not exactly where, and I had a schedule to keep with the motel in Moab.  With a little forethought it would have been on my path.  The same with Monument Valley.  If I had known that the real sights were south of the highway, I could have taken an extra hour and driven to see them.   I didn’t realize the most part of Canyonlands was just down the road from Dead Horse Point.  And I didn’t realize what a wonder the Grand Escalante Monument was, or I might have worked that into my travel plans.  At least now I have a target for the next trip.  Escalante, Goblin Valley, another part of Canyonlands, maybe the north rim of the Grand Canyon.  Possibly some horse riding in certain locations, which would involve getting some practice where I live, since it has been decades since I sat one.  Still, no matter how much planning you put in, there’s going to be surprises.  You might see some spectacular sights outside of the parks and monuments.  You never know what the next turn will bring.

I had a great trip.  Bonnie Springs Ranch, Zion Park, Capitol Reef and Needles have joined Goodsprings, the Mojave and Flagstaff as locations in the series.   They won’t be the same of course, not after three hundred years of civilization’s absence.   I was able to plan the course of my characters over the Southwest.  But they will be memorable locations, filled in with actual experiences.

2 comments on “Trip Out West the Second: Day 9 and Final Thoughts”