I had planned to have this part out last weekend, but we had a hurricane, I had a lot of friends in South Florida in the path, and it was looking like it might even hit me up in North Florida. No concentration for work. Fortunately, all of the friends came out okay, some lost power, most have it back. And the storm completely missed Tallahassee. I didn’t lose power or internet. In fact, where I lived there were even any winds. It was like an ordinary rainstorm, and I’ve been through a dozen thunderstorms that were more violent so far this year. But on with the narrative of DragonCon. 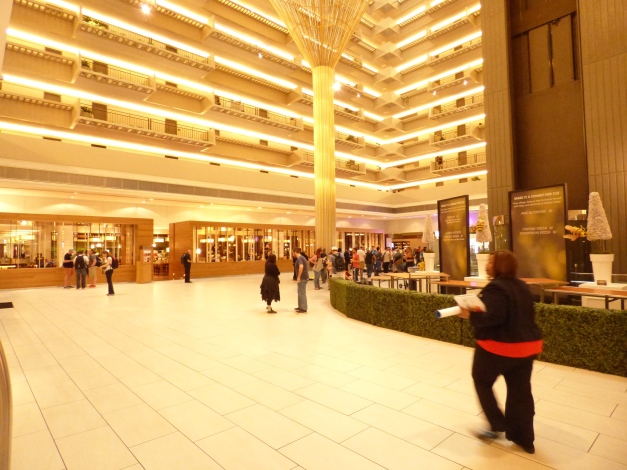 The lobby of the Hyatt early Friday. Not full up, yet.

Got up early enough that I could eat breakfast and shower. Then headed to the Hyatt. It was about a five block walk, not too bad, and there were a lot of people with DragonCon badges on the route. Saw the first costumes, nothing too fancy. That would wait until I got into the Hyatt. The Hyatt was not too crowded, yet. I made my way down to the basement level, to where Jody Lynn Nye’s Writers Workshop was meeting and waiting for the speaker. Unfortunately, the speaker didn’t make it, but Bill Fawcett filled in and gave us the rundown on agents and publishers. Still, it was good to see Jody and Bill.

The food court. Not full yet. Saturday it would become impossible.

After the workshop I ran up to the Embassy rooms and approached Nancy Knight, who had promised me a panel if I saw her first thing Friday. She asked me what I wanted, and I said I was an expert on marketing and social media. She asked if I wanted to do the panel coming up in twenty minutes, and suddenly I had my panel. I found myself sitting between agent Lucienne Diver and Bill Fawcett, with S M Stirling on Bill’s other side. I asked Lucienne a question about agents before the panel, then asked her if I could contact her if the agent currently looking at one of my manuscripts didn’t work out. So in that way I lined up another possibility for representation from a top agent. The panel went well, and I definitely had some information to offer. When we introduced ourselves Bill asked when I was going to get the chapters to him that he had been waiting for, then told the audience that what he had seen was very good. Great plug, Bill.

I had lunch in the food court, one of only two I actually ate there. The one thing I hate about the food court is the difficulty in getting a table. Sitting on the floor is not comfortable for me, and sometimes it takes fifteen minutes of searching to find a chair at a table. It only took ten this time, holding my food and walking, looking. There were a bunch of costumes in evidence, some really good ones, some not so much. One woman had a t-shirt that read, ‘a girl has no costume,’ which was kind of original in itself. 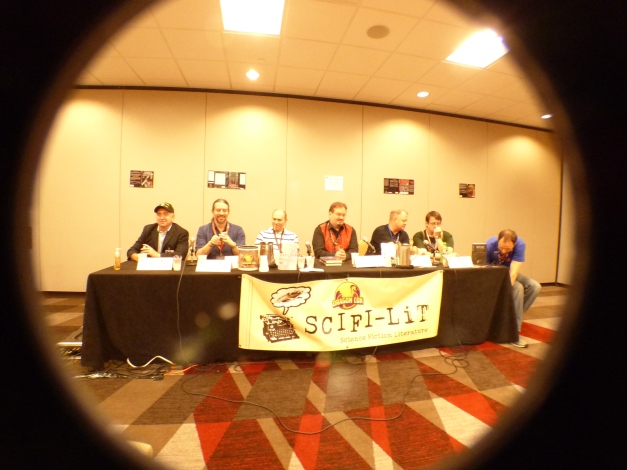 After lunch I went to the Showcase: Indie Authors panel, with Chris Kennedy, Mark Wandrey and others. I talked with Chris after the panel and we tentatively agreed to do lunch the next couple of days. I would finally make that appointment on Facebook that night, one of the reasons I insist on internet access when at cons. I stayed for the next panel, Series Here, Series There: What’s Become of the Standalone?, with Bill Fawcett, Chuck Gannon, S M Stirling and Gray Rinehart. Talked with Chuck for about fifteen seconds after the panel, not as much as I would have liked, but people are busy at cons. At least some people are.  Talked with Gray out in the hall for a few minutes and learned that if I submitted to Baen as an author, then got an agent, they would withdraw any offer they had made. They would only deal with the agent if the agent made the submission. Good to know, since the manuscript I wanted Jim Minz to look at was already at an agency. So I no longer needed to see Jim that weekend and try to get the manuscript to him. Things you only learn at cons, or the hard way, by getting an offer, then having it jerked away from you. 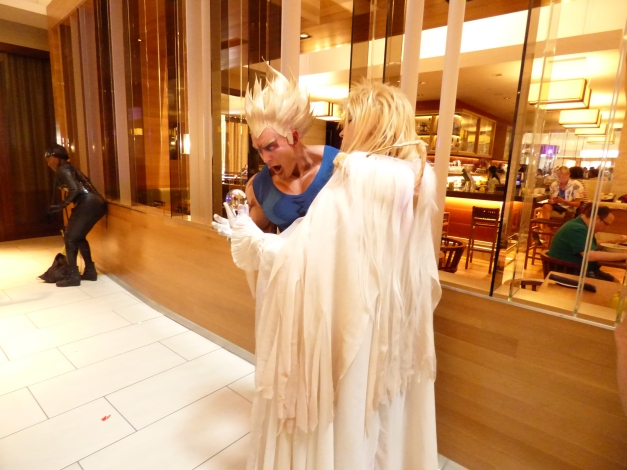 Some great costumes. The guy’s body paint was amazing.

After that I made my only trips of the con through the Habitrail, the walkway between the Hyatt and the Marriott. When staying at the Marquis I would take that trip six or more times a day. There was really nothing of interest for me in the Marriott or the Hilton this year, so I only took the one trip, to go to the VIP badge pickup once again to get some information. As usual, it was two lanes of people bumping into each other while everyone walked with shuffle steps. Some people stopped to take pictures, against con policy, and slowing up the progress. Once there, once back, and I was through with the damned thing.

The Hound made an appearance.

One thing I noted this day was that Jim Butcher was on a fantasy literature panel, and the line stretched all the way around the Embassy lobby. The sad part was the room was already full, and all those people waited for nothing. I suggested to Sue Phillips, who is not in charge of that track, that it might be a good idea to have any panel with Butcher in one of the larger Centennial rooms. 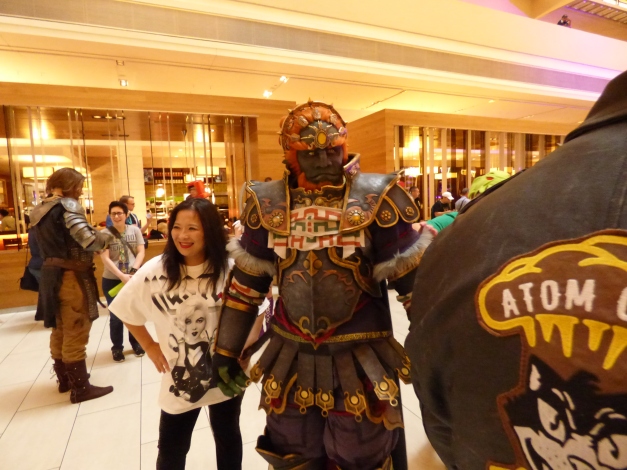 Not sure what he was, but he looked cool.

I walked around the Hyatt, taking pictures, taking in the con. There really wasn’t anything else I wanted to see, but it was too early to go home. Finally, I walked back to the hotel and ate dinner at a nearby restaurant, then went back to my room to do some work.

Altogether it was a good day. I had my promised panel, met with a lot of people, gained some good information. Once you become a working author a con like this is a business opportunity, to make with as you would. Having met people at earlier cons helped, and this one would help with those in the future.