The Third Trip Out West, Part Seven: Day Six: Back To Zion, Day One.

After Breakfast at the small café that serves the hotel, I was on the road again. The breakfast was good, if not the best I had had on the trip, and the staff was friendly. Then into Pahrump. I had been thinking about doing a big roundabout through the Nevada desert to get to I-15 and the trip up the Virgin River Gorge, but now thought it might be better to get to the hotel in Springdale earlier. It turned out to be a wise decision.  So it was down Hwy 95 to Vegas. The state troopers were busy this day, and I saw two sports cars (with racing stickers and everything) stopped on the side of the road getting tickets. After lunch in Vegas I took the Bruce Woodbury Beltway from 95 to I-15, and was on my way north.

Mt. Charleston in the Spring Mountains as seen from Pahrump.

The first time I had come this way the Virgin River gorge had caught me by surprise. This time I knew what was coming, and there wasn’t as much of the shock and awe as the first time. Still, it is a spectacular drive with starkly beautiful rock walls and mountains on each side. I filmed it going through, and only discovered later that there was a smashed bug in the middle of the camera field. The things you learn, too late. Besides, there was no way I could have stopped and cleaned the windshield even if I had known. 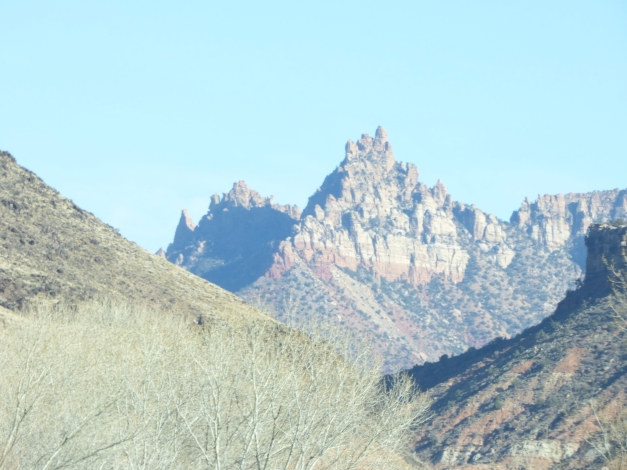 I got off on Hwy 9 to Hurricane, then wended my way through the landscapes to the town of Springdale, situated at the entrance to Zion. Beautiful country of cliffs and mesas. I kept thinking of the stone age, then even further back to the era of the dinosaurs. Some of these rocks had been laid down in seas that covered this area well before the first plants colonized the land, or the first animals dragged their bodies into the air. Everything was going well until I hit Springdale, at which time the Utah Highway Department made its presence known with road work. There were stretches where they were tearing up one side of the road, and only one lane could move on the other. So it was wait for what seemed like an endless line of cars to roll by before going, then stopping again a mile or so further. I think there were three places where they were tearing up the road. The busy season was about to begin at Zion, and they weren’t ready.

I checked into the Zion Park Hotel, about the cheapest you can find in the area but still very comfortable. They had a laundry mat on the other side of a building on the same block, so I thought it a good time to get some done. I had packed enough for ten days and was out there for fourteen. It didn’t take a genius to figure out that I would need to do laundry at some time, and the sooner I could get it out of the way the better. 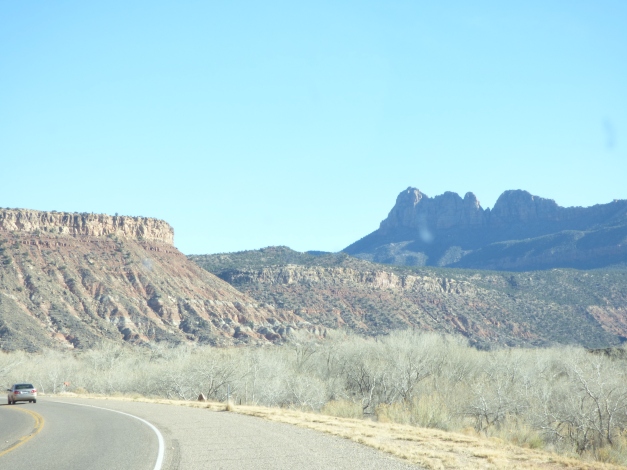 Mesa and rock formations on the way to Zion.

Zion is one of the most popular national parks in the country, and the next day they were switching over to the shuttle system, in which no private cars were allowed past a certain point. You can still drive in and take the high road out of the park, which I intended to do the next day. Laundry was done in a little over an hour, and then it was time to look for someplace to eat. Zion Pizza and Noodle Company, just across the street, looked interesting, so I crossed the road, filling up with the backed up traffic coming out of the park, and ordered a Pizza. The place was crowded, but I found a table outside and was soon in a conversation with a young couple from Ohio. Talk turned to publishing, and another young lady asked a few questions. Yes, everyone really does want to be an author, until they find out what kind of work it takes. Half the pizza was enough, and I had left overs for dinner the next night. I went back to the hotel, reviewed my footage, cried over the smashed bug, and went to bed. Tomorrow would be a busy day, and I would be at this hotel for two nights. It had started raining, a light drizzle, and I went to sleep hoping that we didn’t have heavy rains that would spoil my video taping.