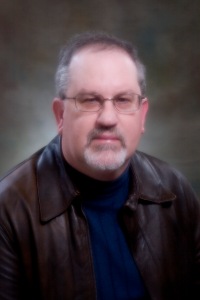 Douglas Kevin Dandridge (Doug Dandridge) writes science fiction and fantasy, striving to make the stories intelligent and original.
Doug currently has twenty-three books released on Amazon, and has made over 230,000 sales in five years.  His Exodus: Empires at War series has 160,000 sales over thirteen books.  Books 3 through 9 all hit either number one or two on Amazon UK in Space Opera and Military Science Fiction, and were in the top five in the same categories on Amazon.US.   He has almost fourteen hundred reviews over all his book with a 4.5 star overall average.  You can find his Amazon page here, and the sales page for his first Exodus book here.

Doug Dandridge was born in Venice, Florida, on September 12th, 1957, less than a month prior to the launch of Sputnik 1, a true child of the space age.   At the time Venice was a retirement community of about five thousand people on the West Coast of Florida, characterized by many of the residents, including the kids, as Paradise.  Reared by his parents, General Contractor Theo Edwin Dandridge, and Dressmaker/later Nurse Hazel Angelina Roy Dandridge, Doug experienced a strange combination of being materially spoiled and strictly disciplined.  Raised in the Catholic Church, Doug attended Epiphany Catholic School, graduating in eighth grade, and further attended Venice Junior High and High School, graduating in 1975.

Venice was a paradise to grow up in, with miles of sandy beaches and thousands of acres of wilderness land along the Myaka River.  Frequent, almost daily excursions to the beach were a part of Doug’s childhood, as were frequent camping trips along the Mosquito infested river.  Work with his dad exposed Doug to all aspects of the construction industry.  Many summers were spent at Good Counsel Camp in Inverness, which featured long canoe trips, archery, riflery and wilderness camping trips along Central Florida’s lakes and rivers.  Most summers were finished by family trips to Long Island and along the Eastern Coast of the United States and into Canada.

Doug started reading at an early age, exploring the works or Wells, Stevenson, Heinlein, Verne, van Vogt and many others from the age of six on.  Ignoring children’s works, Doug frequented the adult stacks of the local library.  Add to this the superheroes of Marvel and DC, and the tales of horror of Creepy and Eeire, and a truly warped personality was formed.  Later discoveries of Burroughs and the worlds of Robert E Howard turned Doug’s mind to a complete fascination with the world of the fantastic.  Forbidden Planet, 2001, Lost In Space, Star Trek, the Outer Limits, Shock Theater, Terminus Science Fiction and others reinforced this fascination.  To date Doug has sampled over two thousand works of Science Fiction, Fantasy and Historical Fiction, as well as many works of science and history.  Trips to Kennedy Space Center and views of Saturn V launches from the roof of the family house in Venice also led to a love of science and speculation about the future.  A high school teacher encouraged Doug to consider writing seriously, but life was young and many things beckoned.

Doug received his first rifle at the tender age of nine, an old .22 caliber bolt action.  He completed three years of Marine Corps JROTC in high school and went on to a four year tour of duty in the Army.  Trained as an infantryman and serving most of his time as a Nuclear Weapons Senior Custodial Agent, Doug fired expert on every occasion with the M16A6 rifle.  He was also proficient with every weapon he ever picked up, from the M1911A1 pistol to the Panzerfaust Antitank Rocket Launcher, and was particularly skilled with the M60 machine gun and the German MG1.  Doug started training in Martial Arts in grade school, taking a year of Judo, then beginning serious study in high school of Tae Kwon Do.  His dad, once an amateur boxer, taught Doug boxing.  He later took Ishi Ru, Shodokan, and other forms of Tae Kwon Do, and had recently begun experimenting with the Katana and Cane fighting, realizing that old age is approaching and needs to be fought.  Still an avid shooter, Doug frequents the local range several times a year to refamiliarize with his many firearms.  Doug finished his military service in the Florida National Guard, where he received training in Microwave Communications and Air Assault.

For many years Doug was a regular motorcycle rider, something he would like to again pursue in the near future.  For twenty years he could be found playing in every city league, intramural or pick up volleyball game he could find.    He was a regular weight lifter, not even dissuaded by open heart surgery, until a rotator cuff injury side-tracked that activity.  He plans to engage in horseback riding, something he has done sparingly in the past, and would love to pursue his dream of parachuting.

Doug attended Florida State University in Tallahassee after his time in the Army.  Doug had an on and off academic career, with eleven semesters on the Dean’s List and two expulsions from the University.  He majored in Biology, Geology and Psychology at different times in his tenure.  He also took course work in German, Spanish, Anthropology, Geography, and two semesters in Army ROTC.  Unfortunately he also studied hard at partying at a well know party school, and from there came his troubles with finishing school.  He finished strong at FSU, top in his class in Psychology, and was able to choose from seven different universities for Graduate Clinical Psychology.   He walked and received his degree in Psychology in 1990, ten years from the time he entered the University.
Choosing the University of Alabama in Tuscaloosa, mainly because it was close to Tallahassee and his party environs, Doug obtained a Masters Degree in 1994 in Clinical Child Psychology.  He also studied Neuropsychology and worked at the Veterans Administration Psychiatric Hospital in Tuscaloosa as a Psychometrist for two years.  That was followed by work at several Community Mental Health Centers both in college and out.  Unfortunately Doug was asked to leave Alabama before completing his PhD, the result of an argument with several faculty members and attempting to aid another student who had been unjustly punished.  He married a local woman and stayed in Alabama for the next seven years, working first in mental health centers as a therapist, then in restaurant management.  He first started writing seriously at this time.
Doug’s first work was an expose’ of the abuses of power in academia, focusing on the University of Alabama Psychology Department.  It was a work of rage, that still garnered the attention of a well-known agent.  It was only rejected when the agent found another work of similar scope just before she received Doug’s manuscript.  He then started on his first work of fiction, The Convoy, which will be offered on this site as a free eBook.  This was followed by more novels and many short stories.  The first agent Doug obtained was a scam artist out for money.  This led to a fear of agents, and Doug only submitted to the three publishers that accepted unsolicited manuscripts for many years.  Only recently has he again started to submit to agents, along with this foray into internet publishing.
Doug was an original member of Holly Lisle’s Forward Motion Site, an administrator who taught world building and web research on the site.  Another break came when the wife of a friend happened to be the ex-girlfriend of science fiction writer Charles Sheffield.  This led to several years of email correspondence with the famous writer.  Charles encouraged Doug to keep at it, believing that he had the talent to make it in the competitive world of publishing.

After his divorce Doug returned to Tallahassee, where he has worked in a Prison Drug Abuse Program, a Department of Juvenile Justice residential program supervisor, and for the last five years with the Florida Department of Children and Families.  Doug reentered school a few years back, which side-tracked the writing for several years, though it was never truly stopped.  He studied Anatomy, Nutrition and Chemistry on route to admittance to nursing school, and while the oldest student in his classes was also at the top of every one.  Unfortunately health concerns side-tracked nursing school.  Now Doug is full time into writing outside of the job that puts food on the table.  And even there his mind is constantly on the worlds, settings and characters he develops for his stories
Doug currently lives in Tallahassee with his four cats, spending most of his free time banging away on the keyboard, writing, rewriting and submitting.  He finds the writing and rewriting enjoyable, the submitting not so much.  Free time pursuits include going to FSU Women’s Soccer and Volleyball Games, Men’s and Women’s Basketball, and of course Football.  Tired of playing the numbers game, Doug is continuing to submit to agents while also self-publishing online.

Doug has written in several of the genres of the fantastic, including near and far future science fiction, urban and high fantasy, and alternate history.  The Deep Dark Well is a novel of the far future, in which aKuiper Belt Miner from Alabama meets a superman on an enormous station built around a black hole.  The Hunger is an Urban Fantasy involving vampires in the mold of Bram Stoker’s Dracula.  The Convoy is a novel set in an alternate World War 2 in which the Kaiser still rules after a German Victory in the first war.   He is currently submitting a gunpowder fantasy called The Chronicles of Connor McMennamin to agents, to be followed by a novel, Shadows of the Multiverse, built around string theory and an terrifying race from another dimension.  Diamonds in the Sand, another early work concerning nanotech in the near future, will be released as a free eBook on this site.  Of major importance is the Refuge series, which has gone through several iterations before the last novel.  Concerning the trials of transplanted Earth people into a dimension of archetypes such as elves and dragons, it was planned as a ten to fifteen volume series.  Exodus concerns a human empire which fled Earth two thousand years prior, establishing a thousand year empire, which the hated aliens have now found.  In science fiction Doug loves playing with Nanotechnology and Black Holes, while in fantasy he prefers to model societies using realistic military and economic models.

Currently Doug has thirty-three books online with more coming soon. The first five books of the Exodus: Empires of War series are also available in audiobook, with book six in production.  Ongoing series include Exodus: Empires at War; Empires: Machine War, Exodus: Tales of the Empire; Theocracy and the Refuge techno-fantasy series. He had been published in Anthologies by Worfire Press (Five By Five Three), Fiction River (Tales of the Apocalypse), Chris Kennedy Publishing (A Fistful of Credits), and the Prometheus Project, and has participated in several charity anthologies. He will be involved in future anthologies from John F. Holmes in the Hundred Worlds Universe, and with Charles E Gannon’s Lost Signals of the Terran Republic anthology. Doug has also signed a contract to write two books and develop the Kinshiop War shared universe. The first book is due out by mid 2018, with the second to follow shortly after.

46 comments on “About Doug Dandridge”