The Third Trip Out West. Part 1: A Serial Blog.

The Third Trip Out West. Part 1: A Serial Blog. Along with Part 2: Doing What We Do Best.

As I have blogged before, I went to the great American Southwest the first time in February of 2017. There was supposed to be a collaboration on a series going down, and the publisher had arranged for us to meet in Tucson, where the other author lived. He dropped out, and it was decided that since we all had tickets to there, and booked hotels, that we would go ahead and meet. I wanted to see some of the Southwest, so I bought a return ticket from Las Vegas and rented a car. While in Tucson I went to Saguaro National Park East, saw the aircraft graveyard, and took in a couple of other sites, and after the meeting was over headed up north to Flagstaff. The next day I was at Meteor Crater, then over to the Grand Canyon. Never been to the Grand Canyon? Go. Until you’ve actually stood there and took it in it just doesn’t seem real. I ended the day in Kingman, Arizona, and headed up the next to see the Hoover Dam and Goodsprings, home of Fallout New Vegas, with a side trip into the Mojave National Preserve. The last day I went to Valley of Fire State Park and Red Rock Canyon National Preserve. I loved it out there, feeling right at home. It was cold, below freezing in Flagstaff, but still dry enough to suck the moisture right out of you, but I could breathe again. 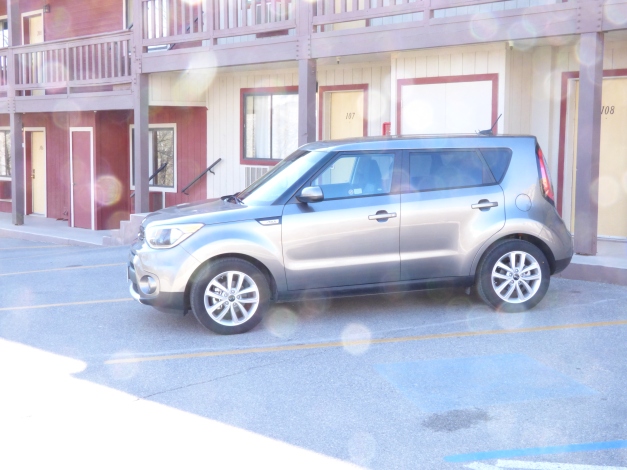 Because of an error with the rental car company, I was upgraded to the same car I drive at home. Even the same color, but two years newer.

I loved it out there, as said, but the trip was too short. I had an idea for a post-apocalyptic series. One of the highlighted areas would be the mountain north of Flagstaff. I needed some more areas, and that meant I needed to do more research. So this time it was a ten day trip starting in Las Vegas, in July. Again the Mojave, discovering Bonnie Springs Motel in the Red Rock Canyon area, then over to Death Valley. Death Valley, at least as far down as I went, got up to 125 degrees. I flew into the Grand Canyon by helicopter, expensive but worth it. From there I went to Zion National Park, then swung up to his Bryce, Capital Reef, Arches and Canyonlands. I went down through Monument Valley, missing the best part of it, and then hitting the Petrified Forest National Park and the Painted Desert. Finally over to Flagstaff to see Sunset Crater, then into California (Needles, hellishly hot) and to the Mojave, then back home.

I got the idea for the next trip while watching videos of the region, especially the wonderful short travelogues of Wonderhussy. She is a young woman who lives in Vegas and travels the desert, finding all kinds of cool places. I found other videos, national parks, state parks, wilderness areas, and formulated my next plan. This time it would be fourteen days. And I would videotape it on the Akaso cameras I had bought. I would hit some of the same places, but spend more time at them, and would do some different things as well. I pre-booked all of my hotel stays, some places I had stayed before, a couple of very unique hotels, and rented the most economical car I could get. And came out of that desert region with even more of an appreciation for it.

I met some interesting people, had some great experiences, was terrified on at least three occasions, and almost met with disaster on my last day.  So, for the sixteen or so episodes of this blog I will be giving an account on my trip. There will be times when I have to concentrate on other aspects of my career, but I hope to do at least one blog a week on this trip. I will have links to many of the places, and as I put my videos online at Youtube I will come back and link to them on the appropriate blog entry. Hopefully many of my readers will come along for the journey, and invite some friends. And I may gain support for some of the worthy people and places I found.

The Third Trip Out West. Part 2: Doing What We Do Best.

On Sunday, March 4th I woke way too early after not enough sleep to fly out of Tallahassee. I’m always anxious before a flight. Not from any fear of flying. No, it’s fear of sleeping through the alarm and missing it. So I was off, to little Tallahassee International Airport. Yeah, the international airport with four gates. And this time I was frisked by TSA, a first. They even swabbed my hands down to see if I had any explosive residue on my hands. I kind of expected that at a larger airport, but it happened to me in Tallahassee. So it was onto the aircraft for the first part of the flight, to Charlotte.

I normally fly Delta when I can. Delta has TV screens at each chair, free internet, music. This time I got American through Expedia. How was American? Well, next time I will fly Delta. Delta goes to Atlanta, while American goes to Charlotte. The first leg was not bad, since it was only about an hour. We got out of the airplane by rolling stairs on the runway, because Charlotte was under renovation, and there were not enough gates. It was a large airport with no tram between terminals. Many of the shops and even some of the bathrooms were closed. At least they had the moving sidewalk thingies in places. I always feel like airports are trying to kill me by making me hurry over long distances so I can get on a plane to cover longer distances quickly.

A quartet of Peacocks having a conference.

The second flight was horrible. Four hours in uncomfortable seats. Even with the increased legroom I had purchased, my ass was numb halfway through the trip. No entertainment, the people on either side didn’t want to talk, and the guy with the window seat insisted on keeping the window panels down. So no view of the Grand Canyon on this flight. Finally the endlessly uncomfortable and boring flight was over, and I was in Vegas. The long trip to baggage claim, the endless voyage to the rental car terminal, and I was finally on my own. The strange thing about McCarran International Airport is the location of the rental car center. You have to take a bus that seems to take forever to reach it. All of the companies are there. I had ordered a really cheap car but Budget happened to be out of them, so I was given a grey Kia Soul with the total electronic package. The same car I own, only two years newer. I was thinking that this trip was going to be really cool. 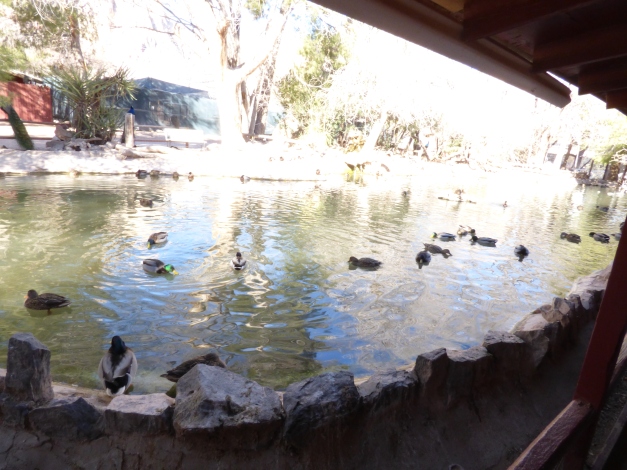 An oasis in the desert, the duck pond at the Bonnie Springs Restaurant makes for a relaxing breakfast view.

A quick stop at Walmart to pick up a fan, an ice chest and some water, and I was off to Bonnie Springs Ranch Motel. Bonnie Springs is in the Red Rock Canyon region, just out from the village of Blue Diamond, with the mountains of the canyon backdropping it. There is a small zoo, and restaurant, a western attraction and riding stables there as well as the hotel. There are flocks of peacocks roaming the grounds with their haunting calls, and the Mojave surrounds it. I couldn’t locate it on my new GPS, but I knew the general direction, and was already on Blue Diamond Rd. The mountains in the background were my beacon, and since I remembered the turnoff from the last trip, it was no problem. Soon I was through the entrance and on the way, Joshua tree desert on both sides. My favorite part of the property is the restaurant, which also has a bar. It looks out over the pond fed by the springs that gives the place its name. Ducks swim through the day, and turtles come out to sun. The last time I was here, in the summer, the turtles were out all day. It was cold at night, so they were nowhere to be found, sleeping under the water. Still, the ducks were out, the wait staff, a woman named Heather, was friendly, and the food was good. They had a fire going in the pit, and it was a very comfortable place to spend a cold night. I got in touch with Wonderhussy, letting her know I was there, and viewed the first of the videos I had taken, from Vegas to Bonnie Springs. And so the first day ended.