The Chronicles of the Eirish: Book 1: The Lich’s Horde. 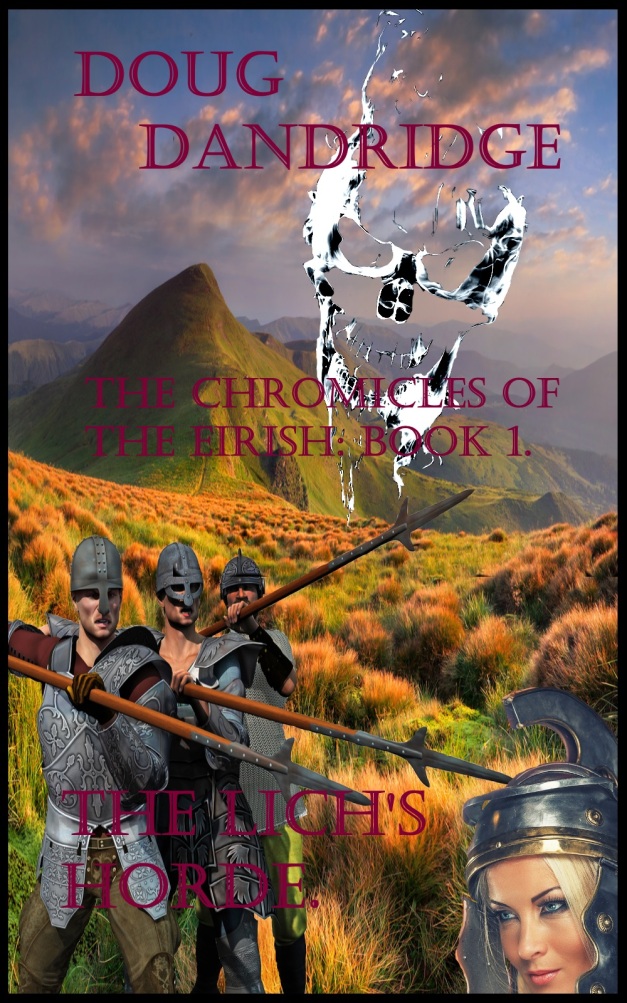 Avalaible on Amazon.US and Amazon.UK. as well as all the other iterations of Amazon out there.

This fantasy novel was just released last night on Amazon, and is now available world wide. It definitely has a military slant to it, and I typify it as Military Fantasy, a term I had heard didn’t exist at a DragonCon panel three years ago. Readers who like the Refuge series will love this book. I believe that even the die hard military scifi fans of Exodus will love it. It definitely isn’t fairies and unicorns. The battles are dirty and intense and much like my space opera ground battles, only different.

Now I know that the rabid Exodus fans will be complaining that I’m putting something out that is not Exodus, lol. Sorry, but many more Exodus books will be coming out, probably another at the end of September. And this book, in its original iteration at least, was written many years ago. So, I’ll tell you the story behind this novel.

Back in 2004, or was it 2005, I wrote a fantasy called The Chronical of Connor McMenamin. I showed it to several friends who were big time writers, and was told I wouldn’t have any problem selling it. Well, I sent it out to the three publishers who at the time were accepting unsolicited manuscripts and received form rejections. Unfortunately my friends weren’t aquisition editiors. Book 1 was the first part of a trilogy. When I started self-publishing I decided to not put it out, since I didn’t have time for another series. Fast forward seven years or so, and I decided to revisit the idea, only twenty years earlier in the series and with another cast of characters. And so this book was born, starring Connor’s father, King Rory. I did thorough research on the people of the ancient world, and came up with a jumble of groups and their ancient gods. I noted that most peoples of the ancient world were eventually conquered and absorbed into some other group. I didn’t want this in my world, so I came up with the idea that the Gods protected their own. Wars were possible, fringe lands could change hands, but the core lands were jealously guarded by their deities, who had more power on their home territories than any invaders. The other idea was that gods gained their power from their worshippers. Not a new idea at all, dating back to the days of the pulps, in fact. The third idea was that of the Walking Gods, former deities who had fallen from heaven when they lost most of their worshippers. Super beings, greater than human, with some of the divine in them still. But mortal, capable of dying. The novel came to about ninety-five thousand words. I started self-publishing with other works and never had time to send it out, and again, didn’t want yet another series until I was finished with some that were already out.

I brought a couple of chapters of The Lich’s Horde to a workshop, where it was critiqued and commented on by a big time editor with a major company, as well as a major award winning writer. The editor liked it, but had some problems with the mixed mythology and some of the formatting. Now, I learned to write by reading other writers, and didn’t have all the Chicago Manual of Style rules down. So I bought the manual and started learning. The funny thing is that even following those rules exactly has led to some arguments with other professionals. Go figure. It’s a no-win situation. I went in and changed a lot of the background, cleaning it up. I also talked with a big time agent at the workshop, and thought that I had nailed down someone who had represented a bunch of best selling authors. As soon as I had the novel cleaned up, and brought it to under ninety thousand words, cutting unmercifully at the agent’s recommendation. I finally got it off to her and waited. And waited. Four months after I sent it off I pinged her, and was told that she didn’t have the copy I had sent her. The copy she had acknowledged receipt of when I sent it. I sent her another copy and waited, and waited, and pinged again, three months later. She replied that she had read it several times and just couldn’t get into it. Which meant she would not represent the book. Funny thing about agents. If they don’t love it, they won’t try to sell it. Try doing that in retail and see how long you last.

I had also seen the editor several times over the last eighteen months, and he hadn’t asked about the novel. Even when I mentioned it he didn’t express any interest. At the workshop he had said that he wanted to see it first before any other house. Now, no interest, zilch. So I decided I didn’t want to have to wait the year to year and a half to get this published if I sent it to their slush pile. And possibly receive a rejection letter after waiting a year. I already have a traditionally published book coming out that the publisher and his editor love. I mean love. The editors comments are that she loves this scene, that scene, the other scene. They love it so much so that we are going to do a third book, beyond the two book contract. I have given up on the other publisher, the one I had always dreamed of doing a book for. As another successful independent author friend has said, they know where I am if they want to talk. I no longer have the time or energy to pursue them.

The story? A Death God kills the worshippers of his brother, the Sky God, and gains power. The Sky God falls to earth and becomes a Walking God. The nomads under the control of the Death God go on a campaign to conquer other lands, other peoples, and throw other Gods to Earth. With the power of their evil deity behind them they are able to conquer the cores of other lands and depose their gods. The Walking God travels to the lands of a king who hates his gods for allowing his wife to die in childbirth. The same king, Rory McMenamin, that the last wizards in the Western world are traveling to see to seek refuge. Because divine magic users, read that as priests, hate the idea that someone else, read that wizards, could actually control as muc power as they do.

The setting is not the traditional high fantasy world, where the armor that great great granddad wore in the same as the current characters are using. Things have progressed, and most are at a Renaissance era of technology. The book is full of action, huge battles, pikes and muskets, cannon and knights, verses nomad horsemen and an undead army they have raised from the fallen of the lands they have conquered. I went over it, added in twelve thousand more words (thanks, big time agent, for asking me to shorten it to a point where it didn’t meet my requirements for a published novel.). In reading it, while doing the rewrite, it was like I was reading a new work, and frankly it excited me. So, if you like hard and gritty fantasy, no unicorns or faeries, but definitely some demons and a lot of gross ass zombies, this might be the book to you.

I’m heading to DragonCon tomorrow. This could well be my last one, since the crowds are wearing on me, it’s expensive, and quite frankly the expense is not advancing my career as I had hoped. I can only get a couple of panels a year. I understand. They spend big bucks on big name guests and they have to get them in front of the fans. But two panels is just not enough. I could possibly do two smaller cons next year that would offer more exposure. But I am going this time, and will have after action reports to blog about in the coming month.

Currently the book is listed on Amazon.UK as Low Fantasy. I don’t even know what in the hell that is.