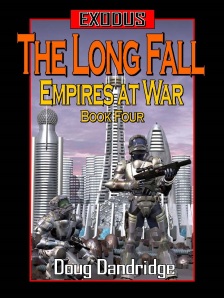 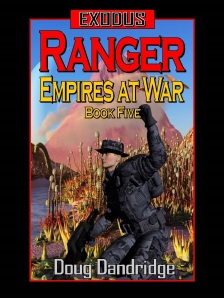 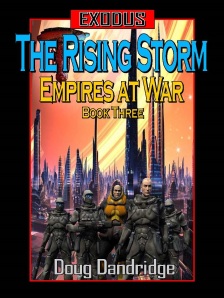 In film making parlance, Exodus 4 is in the can.  Coverted to mobi, cover ready, prepared for uploading.  that will occur tomorrow, Friday, October 11, 2013.    It should be up and running at the Amazon site by Saturday, October 12th.  I have been getting a lot of questions about then this book was coming out.  Well, here it is.  It even includes a glossary in the Appendix.  It does not include the line drawings of the ships that appear in books 1 through 3.  For some reason those drawings would just not interact with Word 2010, even though I put them in their documents using that program.  Now Word freezes up if I even look at more than two pages of those drawing, so they can just sit where they are.  I figure that most people that are going to buy book 4 already have books 1 through 3.  If not, well, I will be offering those books on special over the next couple of weeks.  Book 3: The Rising Storm, has a new cover, sort of, and will go on sale for a new lower price.  As you can see from the covers above I also have one for book 5, titled Ranger.  It will be in the same time frame as book 4, but will focus on the story of Cornelius Walborski, farmer turned hero, who only wants to kill Cacas.  It should be out by December, with a little luck.  Thanks to Ruth de Jauregui for the lettering and framing of these covers.

The pacing is a little different in book 4 as well.  Book 3 covered about a month, in 200K words.  4 covers almost a year and a half in 124,000 words.  Some more subplots are opened, and will hopefully lead to even more books.  As far as the short stories go, I just finished one titled Retribution, and will be submitting it to a big time anthology.  If it is picked up I will gain more exposure for the Exodus series, in my mind a good thing.  If that story is not picked up I will put it up as a freebie on my website and this blog, and try them with another.  I am also working on a proposal for a big time publishing contract.  I’m not sure if that will be Exodus.  I would prefer to keep Exodus as a self pubbed series, so I can put out books as I want.  So a lot going on, including a memoir about growing up in a small West Florida Gulf Coast Town that will probably not be of interest to my scifi fans, and is more of a local interest story.

I hope everyone will keep reading, and I will try to keep the primary series going along.  Thanks.