The Third Trip Out West, Part Eleven: Day Ten: Monument Valley, and the Night From Hell. 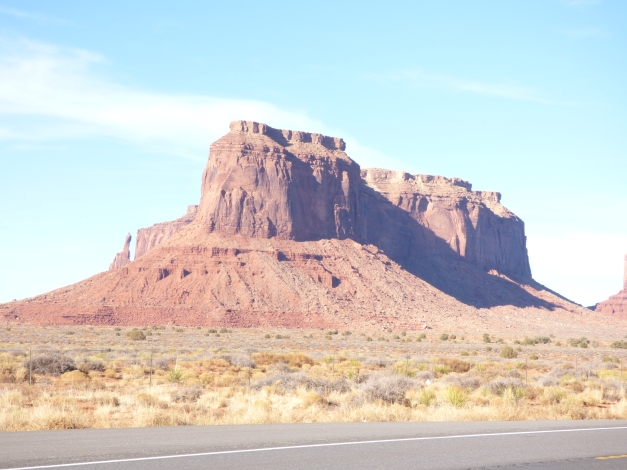 One of the Monuments as seen from the highway.

I awoke in my apartment at Goulding’s after a very good night’s sleep on a comfortable bed. My first thought was to see if I could stay one more night. I wanted to hit the Moki Dugway and Valley of the Gods the next day, and my next scheduled hotel was in Blanding. That would involve doubling back, which I didn’t want to do. And besides, I was already in the room here, and wouldn’t have to move. Little did I know at the time that I should have gone ahead and driven to the Rodeway Inn in Blanding, where I had a room reserved.

My neighbor at the Goulding’s Lodge Apartments.

After breakfast at the Stagecoach Restaurant I went to the registration desk, and was told that I would not be able to keep the room for another night. I kind of stormed out, only to have the young lady run after me to tell me I could keep the room after all. Satisfied that I would get another good night’s sleep, I went back to my room after a stop at the local store and prepared for my tour. 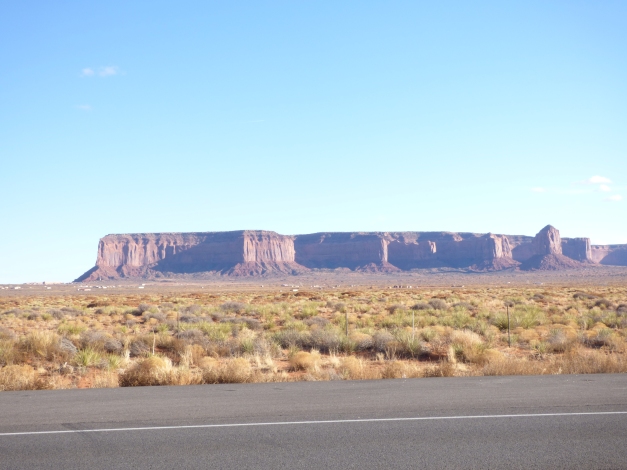 Looking at one of the larger mesas.

The tour was in a truck fitted out with seats on the bed. There were two couples along on the tour, and I sat near and talked with a couple from Bavaria who were touring the United States on motorcycle. The wife spoke the most English, so she served as translator. We first stopped at an authentic Hogan, the traditional dwelling of the Navajo, right across the street from the lodge. An elderly woman showed us how they made and died the wool used on the blankets, then set up the hair of one of the women in a traditional Navajo style. After that it was across the road to the way into the Navajo Park that contained the wonders of Monument Valley. 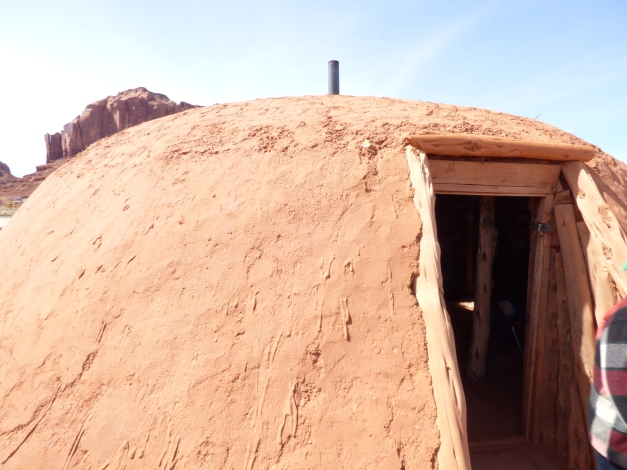 I had come this way in July of 2017. I hadn’t done my research, and thought that I was driving through Monument Valley. Only to find, after I got home, that I had missed the greatest part of it. We stopped at The View, the park hotel, restaurant and gift shop, for a bathroom and picture break, then headed into the valley. Now, if you paid to enter the park you could drive your own vehicle, though some of the roads were restricted to tours only. Seeing a car from Vermont stuck in the sand on one hill it seemed that letting the professional drive was the right choice.

The guide, a Navajo man, gave us the facts about the various monuments, including some of the films they had been featured in. He also taught us how to say hello in Navajo, and sang one of their songs along the way. I made a mental note to look up some of the movies he mentioned. I had seen most of them before, but this time I could look at the settings with some knowledge of where they were. I asked the guide about how the monuments had come to be, and all he could say was this area had been under water millions of years ago. We’ll, he wasn’t a geologist, so I guess I shouldn’t have expected anything more. I asked him about buffalo in the park (they had buffalo in the movie I had seen the night before). His answer was ‘Hollywood’, and that there had never been buffalo in this area. 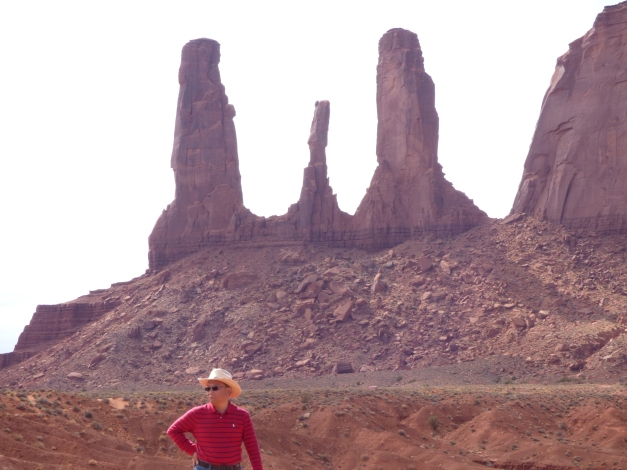 The valley was spectacular. Rock formations everywhere. People actually live out here, and the guide told us how dark it gets at night (something I got to experience that night). We made our way to John Ford Point, where a lot of movie scenes were shot. There was a horse on the point and people were paying to having their pictures taken on the animal. Walking toward it I would have sworn it was a statue of a horse since it didn’t move a muscle, not even an ear. Then it moved a leg, and I realized that it was a living animal, just extremely well trained. One of the other people on the tour said the kid with the horse said it was his sister’s animal. We passed some horseback tours on the way further into the valley. 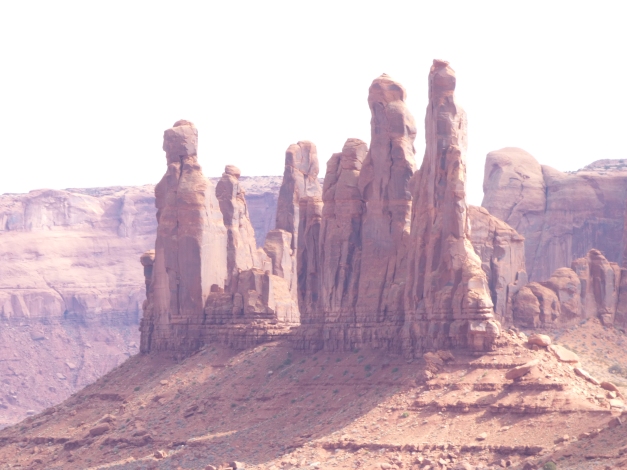 Another of the fantastic formations.

It was only a two-hour tour, but we saw plenty. There are four-hour backcountry tours for those who really want to get into the heart of the place. Two hours was plenty, and I gave the guide a nice tip. Another tour, one of the longer ones, was staging in the parking lot when we got back, and it looked like that truck was going to be full. I highly recommend Monument Valley. Not as spectacular at the Grand Canyon, but what is? Still, the formations are a snapshot in geological history. None of this was permanent, as strange as that seems when talking about rocks. The scree slopes of monuments, the rocks precariously balancing above, showed that these structures were in the process of collapsing. It would take time, probably millions of years, before they were gone, but it would happen.

Two of the monuments featured in the John Wayne movie ‘She Wore a Yellow Ribbon.’

I took quite a bit of video with my selfie stick on the way, and I spent the evening going over some of it. I had a lot of trouble getting the Wifi to come up and finally gave up. I decided to hit the sack early, get up early, and hit the road. The Dugway and Valley of the Gods awaited. 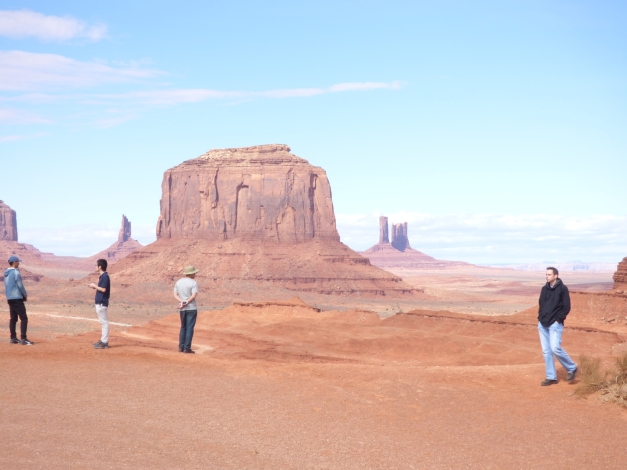 I woke up a couple of hours later as my fan and CPAP stopped working. There was no power, and now I knew what pitch black night looked like. I could see my hand in front of my face. The only light I had was from my cell phone and my Kindle. Good thing, because I wouldn’t even have been able to find the bathroom. I waited for several hours, reading, for the power to come on and it didn’t. Finally, I decided I needed to get some sleep, though I really didn’t like the idea of sleeping without the CPAP, since I had gotten so used to it in the almost two years I had been using it. I finally dozed off, then woke up in a panic, gasping for breath, my heart pounding, in the middle of a panic attack. I’ve only had maybe three panic attacks in my life, and they’re never pleasant. I believe I had stopped breathing and was fortunate to have woken up. 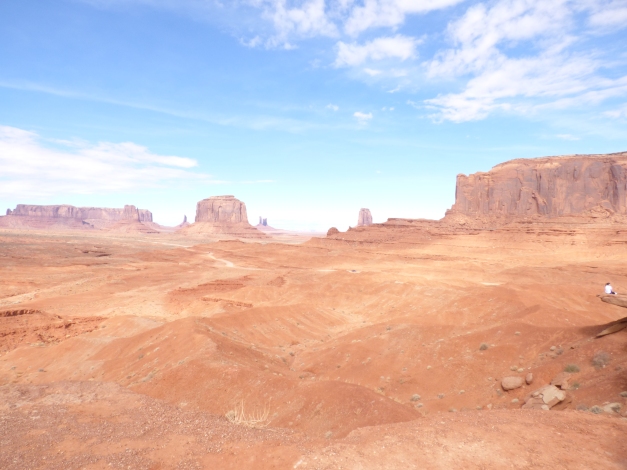 A distant look in the valley.

I talked to the manager about it the next morning. The power came back on about forty minutes before I was supposed to wake up. So I had a day with no rest to look forward to, and I had to get moving. I suggested that they get some battery packs and let the guests know they had them. The guy in the apartment next to me had complained that his daughter’s medicine needed refrigeration, and he had been forced to go out and find ice that night. Into a landscape entirely without power. Later that day I learned that a huge swath of the reservation had gone without power. I’m sure it’s an infrequent event, but it does happen, and next trip I may have to find a way to bring my power inverter with me. But the night was over, and it was time to head off to the next adventure.