The Third Trip Out West, Part Twelve: Day Eleven: The Moki Dugway (sorta), Valley of the Gods and the Needles Section of Canyonlands National Park.

Cliffs along the way to Mexican Hat.

After speaking with the manager of Goulding’s I headed out, Akaso camera primed. A couple of miles down the road there was a sign for a restaurant at Mexican Hat. I would get there well before the turnoff to the Dugway and Valley of the Gods. Mexican Hat is really just a stop in the road on Hwy 163. There are a couple of hotels, a few restaurants, and one gas station/convenience store, and the inevitable Mormon church. And, of course, the famous hat rock. And last but not least, the San Juan River and the Olde Bridge. The Olde Bridge Café is on the tight turn on the other side of the bridge, coming into Mexican Hat, so I passed it by at first, running through town looking to see what they had. I turned back around and went to the café, parking next to it and away from the cliff with the falling rock warnings. The restaurant was very cool, with a lot of nostalgia and a great view of the river. I was waited on by a young Navajo man wearing a DC comics shirt and we got to talking about comic book movies. The breakfast skillet was very good, and I only had to share the entire restaurant with a couple of English girls who came in later.

Watch where you park.

After a stop for gas and sodas I was on my way, feeling very tired but having no choice but to forge on. Unlike home, where I can take a day off and go back to bed, on the road I’m more constrained by my itinerary and hotel bookings. The scenery, was, as always, spectacular, with mesas and cliffs everywhere. I easily found the turnoff to Utah Hwy 261 and head for the Moki Dugway. The road was paved all the way there, somewhat surprising. It turned into dirt and gravel just before getting to the Dugway, which is all dirt and gravel. I had been researching this place for months, and was looking forward to driving up it. 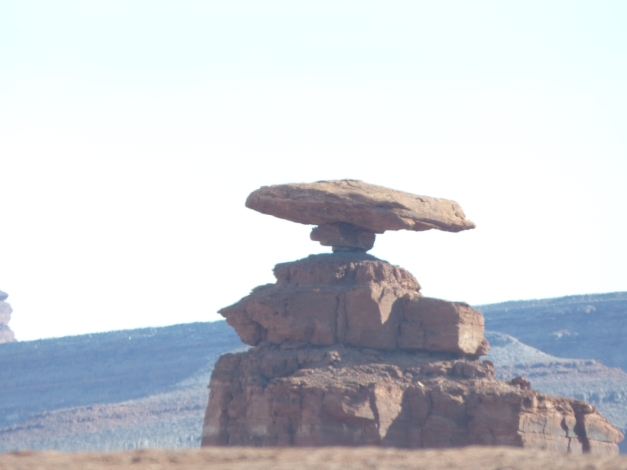 Seeing it from close up started second thoughts. It went up this massive cliff, and I could see cars coming down, which lent it scale. I was very tired, and the panic attack of the morning was still in mind as I looked. I had been up several steep switchback roads on this trip, so this one shouldn’t have been a problem, but in the back of my mind was this sense of fear. I went over to check out the signs for Valley of the Gods, my other destination for the morning, then back to look at the Dugway. Finally I said the hell with it and headed for Valley of the Gods. Sitting here at home I regret not going up the Dugway, which would have been a hell of a drive. Well, maybe next time.

The cliffs in the Valley of the Gods, near the Moki Dugway.

Valley of the Gods is billed as a lesser Monument Valley. I have to say there was nothing lesser about it. The monuments are just as fantastic, and there are a lot of them. The land is held by BLM, so there is no fee to enter. The road is for the most part in good shape, though there were some steep ups and downs, and some places with deep sand. I just made sure that I was going fast enough when I hit those places. And it was a narrow road, which necessitated waiting sometimes for approaching traffic to pass. But there wasn’t much traffic, allowing for slowing and stopping to take pictures. Again, spectacular cliffs, great mesas, and a constant reminder of the stone age and further back. It was about an hour’s drive, and well worth it.

Tough old bull heads over to check me out. 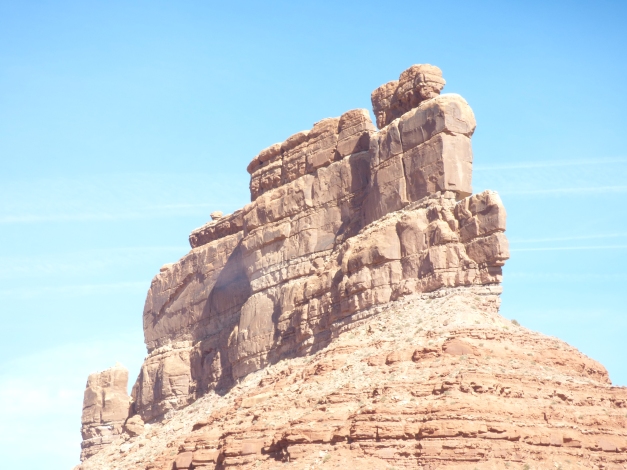 Formation in Valley of the Gods.

One of the coolest memories was seeing some open range cattle at the beginning of the drive. I have always been of the opinion that cattle would be helpless if not for humans. We have bred them over the centuries to be fully dependent on us. Not these guys. There was a tough looking cow with two calves who immediately sheltered behind her as my car drew near. The female had her head down, narrow eyes staring at me. A one horned bull stood nearby, lowering his head and walking toward the road as he glared at me. These were not the pampered cattle I had seen in the east. This male could handle himself against coyotes and wolves, and probably hold his own against a cougar. Something to think about when I write tales of this area.

Snowcapped mountains in the distance.

Hwy 163 continued northeast until it turned into Hwy 191 and bore more north towards Blanding. This was truly desolate country, with very little in the way of civilization. There were at least a couple of small towns on the way, Bluff and White Mesa, and the views of the snow-capped mountains in Colorado to the east were beautiful. There was also a local range to the west and another to the north, both with snow on the upper slopes. One thing that had worried me about making this trip in March was the weather. I’m a native of Florida, and though I have been in snow, I have only driven in it once. That experience was enough to make we wish to forgo the experience in the future. So far the only snows I had seen had been on the higher elevations, so everything was cool, so far. I stopped in Blanding at a 7-11 to get gas and some food. I asked the guy there what their hours were. We had 7-11s in Florida when I was growing up. The name came from their hours, 7 AM to 11 PM. An hour earlier than other stores of the era, and two hours later. I was told they were opened twenty-four hours a day, and thought they should change their name to 24-7. 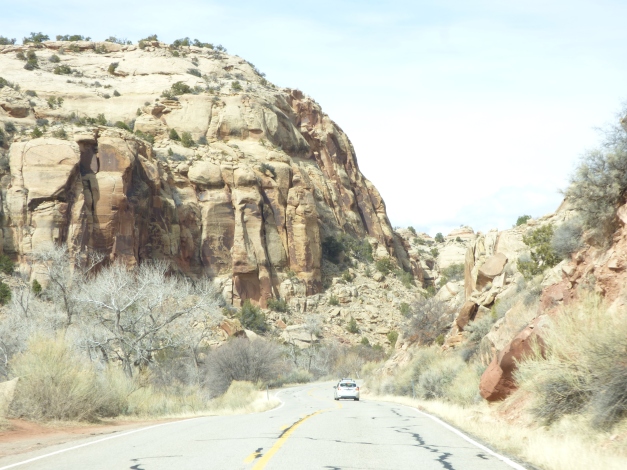 On the way into the Needles section of Canyonlands.

A couple things of note here. When I first came to this region, back in February, 2017, I was constantly fooled by distances. What looked like a couple of miles turned out to be ten, fifteen, even twenty miles. A newcomer would be easily fooled, and could walk to their death thinking they were only an hour away from their destination. Something I was sure happened to a lot of early settlers and explorers. Now I was starting to get a sense of scale. I could tell that the feature that looked like it was a mile ahead was actually much further. Those mountains to the west that looked so close were actually to the south of Canyonlands National Park, and thirty or more miles from me. The mountains in Colorado reminded me of the massive ranges in the Alps, covered in snow much of the year.

Another range of mountains in the distance.

The second thing, I was trying to come up with an idea for a novel I was going to write for Chris Kennedy. I am normally a setting man. I draw maps, or look at maps, or in this case drive across landscapes, and come up with my setting. After that I flesh out a story, then add the kind of characters I think will make the story work. And I was getting a lot of ideas on this trip, not just for my post-apocalyptic novel, but for others, like the one for Chris. These were great settings. For all kinds of stories. Even the night of total darkness in Monument Valley gave me ideas.

Mesa in the Needles section of Canyonlands.

Reaching Hwy 211, I turned left and headed to the Needles Section of Canyonlands National Park. Like all of the approaches to the canyons this was another spectacular drive, with all kinds of beautiful formations, and the snow-capped mountains to the south were a great backdrop. This part of the park was not as well attended as the Island In The Sky section I would attend the next day. There were many hikers gathered at the park visitor’s center, but otherwise not many visitors. I got a look at the park, was feeling exhausted from have no sleep the night before, and decided I needed to hit the road. Chalk up another mistake for not doing my research. On getting home I found that there was actually a reason this was called the Needles section, a fantastic formation, which I missed out on.

Hole in the Rock along Highway 191.

I stopped to get a look at Hole in the Rock just off the highway south of Moab. This is a windows type of arch formation, just like in Arches Park, but is not on public land. People climb all over this thing, and I hope they are not taking samples and souvenirs from it. A beautiful formation, but its future is not bright if people are messing with it, like they were when I passed this way in July. Didn’t see any of that this time, so maybe it’s safe. 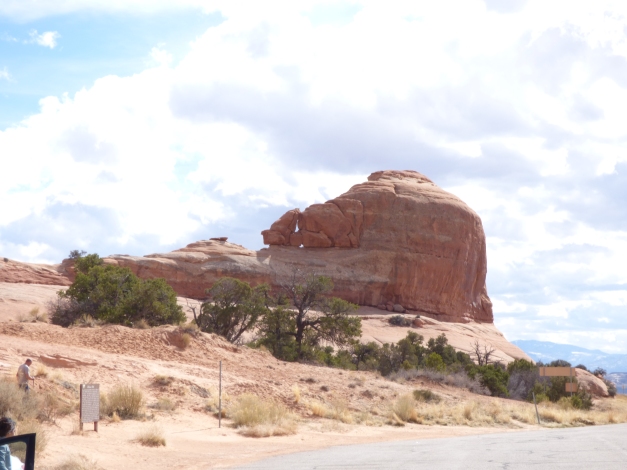 I finally got into Moab, after waiting out a couple of one lane road construction stops that stretched for miles. I was exhausted, and fell into my bed at the Super 8 for a three hour nap before getting dinner. Then it was check my video (all good) and get to bed. I would be here for two nights, and tomorrow had two national parks on the agenda.