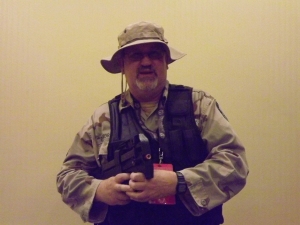 I was up early Sunday morning for a gathering of friends.  I put on my Stargate SG-3 uniform, which was almost the same as my SG-1 costume except for the Marine theme, but left behind the vest and submachine gun.  Cosplay is great, and I really admire the people who go all out the entire Con, but it can really be a hassle.  So it was garrison costume for me, and since I was the colonel, my word was law.

Kevin J. Anderson holds a Sunday breakfast for the alumni of his Superstars Writing Seminar.  I knew most of the people at the table, including Kevin and his lovely wife, Rebecca Moesta, as well as some other up and comers from the seminar.  Short plug here: if you are at the point of your career where you want to learn the business of writing, the Superstars Writing Seminar is a good place to learn. Kevin, Rebecca, Eric Flint, David Farland and James Artemis Owen as regular instructors, with the addition of several guests every year.  Enough for the advertisement, but I truly believe this is a good investment.  The lobby of the Marriot was dead, a sign of the drunken debauchery that had taken place the night before, and with no parade to force people to get up too early, it was actually easy to get around.  Anyway, good start to the day and I headed off to the first panel.

It seemed that Sundays were a little bit of a slowdown day in the past two Dragon Cons I had attended.   As more people woke, like zombies leaving the dark, it got more and more crowded.  By early afternoon it was again packed with people.  The really popular panels and presentations again had long lines, the longest I had ever seen on a Sunday.  And again, I was headed for the literature track panels that almost always had some room.  Not as much as they had the first year I had attended, but there were always a few seats available.  The first panel I went to was Agents and Editors Spill Their Guts.  At the end of the panel I made contact with one of the editors who asked for my card, always a good thing.  It’s always good to have someone at a publishing house know your name, especially if you want to move from a purely independent career to one of a hybrid.

I really didn’t have a panel planned next, but the Starship Smackdown, run by my friend Van Allen Plexico, looked interesting.  I settled into the audience while the panel prepared.  Van introduced the judges, James Palmer, who I had met the year before, and Scott McGlasson, who is the moderator of the Space Opera page on Facebook.  Van said they would have three judges, and I wondered who the last one would be, when Van announced that he was going to ask someone from the audience to be one of the judges.  And that was how I found myself on my first Dragon Con panel.  Now I had been trying to get on a panel at Dragon Con since the year before, without luck.  And here I was, on a panel having the time of my life.  Thanks Van.  The room was packed with an enthusiastic audience, so what more could I ask.

Starship Smackdown had the audience suggest sixteen spaceships from literature, video and games.  Two out of three judges had to have heard of it, and some of the game suggested ships were too obscure for any of us to recognize them.  We finally came up with our sixteen ships, including vessels from Star Trek, Star Wars, Babylon Five, Battlestar Galactica and Honor Harrington.  We worked through the ships battling each other, and ended up with a combined Shadow/Borg ship (the Borg had assimilated the Shadow vessel to form the Shadow/Borg Chicken Cube) versus the Dauntless Superdreadnaught from Honor Harrington.  After a little discussion, the judges decided unanimously that the Shadow/Borg would be able to appear right next to the Dauntless and take it.  Great panel, and hopefully the first of many going on into future at Dragon Con.

Next up was Monsters and Mayhem, another Panel I wanted to attend so I could pick the minds of some editors.  And what did I learn?  Zombies are so last year.  Wow.  And here I was working on a fantasy novel for traditional submission that had zombies.  Not as the most central feature of the novel, but still.  Now they’re going to take an even lesser role in the novel.

After a meal break, I went to the SFWA meeting.   I wasn’t sure what the meeting was going to be like, but like most meetings half of it dealt with things that really didn’t concern me.  But again I made some contacts, one of which might really pay off in the near future.  That’s part of going to a convention as a professional author.  Sure, it’s fun, there are the same sights and sounds, the same fun to be had.  But it’s also work, one of the reasons it’s a legitimate tax write off.  Authors go to Cons to catch up with the latest things coming, the next big thing on the horizon, making new fans, learning new skills.  And to make contacts.  Some day I may need to send something to some editor, and knowing a little bit about them, their likes and dislikes, is always an advantage. 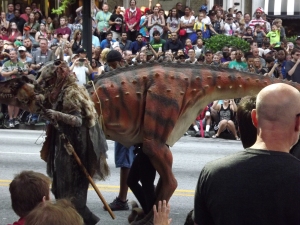 I finished off the day watching some bestselling fantasy authors, including Nancy Springer, who currently lives in my area of Florida, construct a round robin fantasy story.  Then on to the Self Editing panel, which had some opinions I really didn’t agree with, and then the Getting Your Novel Turned Into A Movie panel, the last of the night.  Fans sometimes ask me about when my Exodus series will get turned into a movie or movies.  And honestly, if it took so many years before there was series talk of David Weber’s series getting onto the screen, it’s going to be even more before mine makes it.