Review of The Beast of Mysore 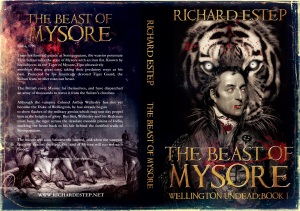 In the past several years I have been asked by several authors if I would read one of their books and post a review.  Mostly this was from friends, or friends of friends, and I was talked into reading a book that I really wasn’t interested in.  And invariably these were bad books.  Not bad stories, not horribly unimaginative.  Some were great story ideas, executed well, with imaginative characters and settings.  So, what was wrong?  In a word, errors.  Most people can handle some errors in a book, whether it be typos or grammar, or simply confusing sentence construction.  This is not just a feature of independent books.  I see enough of them in traditionally published works as well.  My books have some, but I don’t think they are any more mistake prone than many traditionally published books by well know authors.  But most of these books I agreed to review had so many errors, up to several a page (in one case five or more each page), that I couldn’t finish them.  One I reviewed some years ago (I had promised to give an honest review, and warned the author that was what he was going to get at the end, hoping he would say forget it) had the villain’s name spelled four different ways in one chapter.  Now, what these people really wanted was a five star review from an Amazon bestseller, but I wasn’t willing to give one based on their effort.  I want to have some trust and credibility with my readers.  The authors want me to pass on some of my success to them, though I’m not really sure how that works.  Since I am not in this business to make enemies, I will not do a review.  And have basically given up on doing reviews of unknown authors, since I really don’t have the time.

So what was different about Richard Estep’s The Beast of Mysore: Wellington Undead, Book 1?  Well, I have always been a big fan of the Duke of Wellington, in my opinion one of history’s great military leaders.   I have also read the entire Sharpe’s series by Bernard Cornwell.  And the way Richard presented this book, with the leadership of the European nations consisting of vampires, a new idea, caught my attention.  These are not the hide in the dark (though they still can’t come out in the day) bloodsuckers of most fiction.  Because of their abilities; strength, speed, longevity, they are superior to mortals, and so have risen to the heights of their societies.  Kings, dukes, generals, on down to captains and such, these are the leaders of Europe during the Napoleonic wars.  Vampires are not only the leadership, but are also force multipliers on the battlefield.  Nothing like an officer with super strength and speed swinging a sword at the point of the attack to achieve a breakthrough.

What I liked most about his vampires was they were not only creatures of the night, with essentially evil dispositions, but were also King’s officers, honorable men who take their oaths seriously.  And as hard to kill as they are, they are nowhere near invulnerable.  They can be killed, in the most painful manner imaginable, and they are willing to sacrifice their immortality in service to the King.  No cowards these, hiding during the day and only striking at the helpless.

And the opponent, the Beast of Mysore, the Sultan, is just as powerful in a very different way.  He is obsessed with tigers, for good reason it turns out, and his personal guard has its own supernatural abilities.  It’s a clash of cultures, both natural and supernatural, and Estep does a great job of using both the strengths and weaknesses of his characters in his stories.  The battle scenes are well done, and reminded me much of Cornwell’s Sharpe series.

After reading the book Estep not only got a review and a blog, but he gained a fan.  I want to read more of this series.  Fortunately, he already has a book 2 out, with 3 coming in the near future.  I highly recommend this series, both for fans of the supernatural and of historical fiction.  Will the fans of my space opera like this work?   I know that many of my readers like their fiction in one or the other genres, and this series is definitely cross genre.  But since the military action is first rate, I think even the people who despise fantasy might find this series an enjoyable read.  It’s definitely worth a look.  You can get it here.