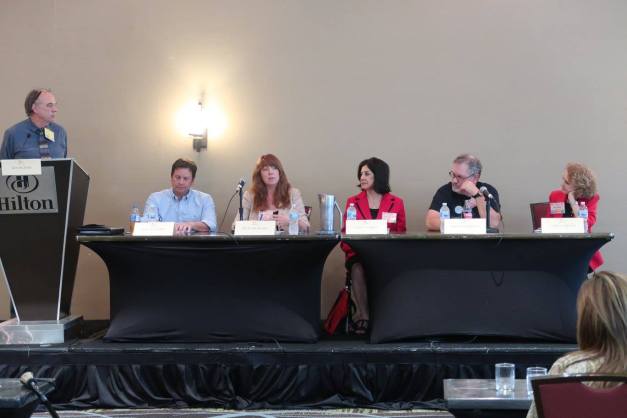 Dredging Up Your Darkside Panel at the 2017 Florida Writers Conference.

I’m kind of late with this entry, since the conference was over a month ago. But the October 30 Days of Giveaways campaign, followed by the Lost Signals Anthology post, and numerous projects, took all of my time. But I did attend this conference, and as a faculty member, meaning I got free admission and half of my hotel bill paid.  I was planning on this being my last non-genre conference, needing the time next year for promotion, but I had such a good time I might reconsider. It wasn’t a huge conference, probably around two hundred attendees, but was well organized and well run.

It was a first-class event, running from Thursday through Sunday. The faculty had a meeting on Thursday evening, and then they had some bootcamps, mostly for newbie writers, after. I cut loose after the meeting and went to get something to eat. Now the hotel, the Altamonte Springs Hilton, was four to five star facility that was suffering from repairs and renovations going on at the time. I think something to do with the hurricane that had come through the month before. Getting an afternoon nap was hard, since they were banging away on the floor above. But the conference center and the meals were very good. Meals were included in the price of admission, which meant free for faculty members. There were presentations by NYT Bestseller Steve Barry, and author of First Blood (the book the Rambo movies were based on) David Morrell, both during lunches.

My first event was a panel on Friday called ‘Dredging Up Your Darkside.’ I found myself at the front of the room with four other writers, mostly mystery or police procedurals. People whose stories, for the most part, deal with violence and crime. And myself, a military science fiction writer, known for wiping out millions. My time travel response seemed to go over well (I don’t like them on the whole), and fueled a lot of responses from the other panelists.  The idea of the panel was how we got ideas for murder and mayhem. One audience member even made a comment that we seemed to be such well adjusted people. Little did she know.

I had two presentations that weekend. Self Publishing for Fun and Profit was late Friday night, followed by How To Write Science Fiction for the Hardcore Fan on Satruday morning. I believe both went over well, and I had a blast talking with other writers. I also did two interviews that weekend, where writers pay to talk with faculty members for twenty minutes to ask any questions they might have.

I saw my friends M J Carlson, Elle Andrews Patt and Vic Digenti at the conference. I had met MJ at Superstars in Colorado, and Vic had been to several events in Tallahassee. I had seen Elle at Dragon Con in Atlanta several times. They had also been participants of the Prometheus Trilogy I was in some years ago.  I also met Prometheus alums Bria Burton, Charles Connell and Ken Pelham for the first time in the flesh.

For those inclined, there were agents and editors present for them to pitch to. Already having a publisher for one project, self-publishing everything else, and having two agents interested, I didn’t need to do this. But it was there for people who wanted to take a shot at a pitch.

Saturday night was the Royal Palm Literary Awards banquet. I was not entered, so really didn’t expect anything, and I wasn’t disappointed. I have only entered one contest in my life, preferring to focus on sales and reviews, of which I have plenty. We had a Tallahassee Writers’ table, and three of our members won first place in their categories. Sam Staley and Doug Alderson were there to receive their awards, while Rhett Devane was absent. For one medium sized city we seem to have a lot of talented writers.

What I enjoyed the most about the conference were the breakfasts. Friday and Saturday were full breakfasts with eggs, bacon or sausage, and pastries. Sunday was the so called Continental breakfast not my favorite. They were very early for someone who normally sleeps late, but I forced myself up at 6:00 so I could shower and get ready. I sat at the science fiction table one day, the fantasy table the other two. Interesting people, great conversations, and my highlight of the conference.

The Florida Writers Conference was a great event. As said at the beginning, I was planning to cut out all no-genre  conferences and conventions next year, but if the time opens up, I could see myself attending this one again.

Next up: Exodus: Empires at War: Book 13: Retribution. It’s here. Or it will be by the time I do my next blog.